Manjot Kalra, who scripted India's U-19 World Cup final victory last year has been cleared of "age fraud" & has been given the go-ahead to represent Delhi

Manjot Kalra, who scripted India's U-19 World Cup final victory last year has been cleared of "age fraud" and has been given the go-ahead to represent Delhi by DDCA Ombudsman Justice (Reitred) Deepak Verma over-ruling former Ombudsman Justice (Retired) Badr Durrez Ahmed order which had handed the batsman a year's ban for age fudging at the junior level. Kalra was now free to play till further orders and instructed DDCA's Apex Council to conduct an investigation in the matter as per rules.  DDCA Director member Sanjay Bharadwaj told Republic TV:

"Finally justice has been done and Manjot Kalra, a national hero, has been cleared of all charges. The order has been modified and the Ombudsman noted that Kalra was singled out even though there were other players also who were levelled with similar allegations. Only Kalra was handed the ban and there was another player whose father had apologised and even that player was allowed to play, but Kalra was banned. The Ombudsman also felt that the enquiry was without jurisdiction in the sense that as per rules the Apex Council shall make the preliminary enquiry and forward it to the CEO. So, that process will be followed. Till further orders, he can play." 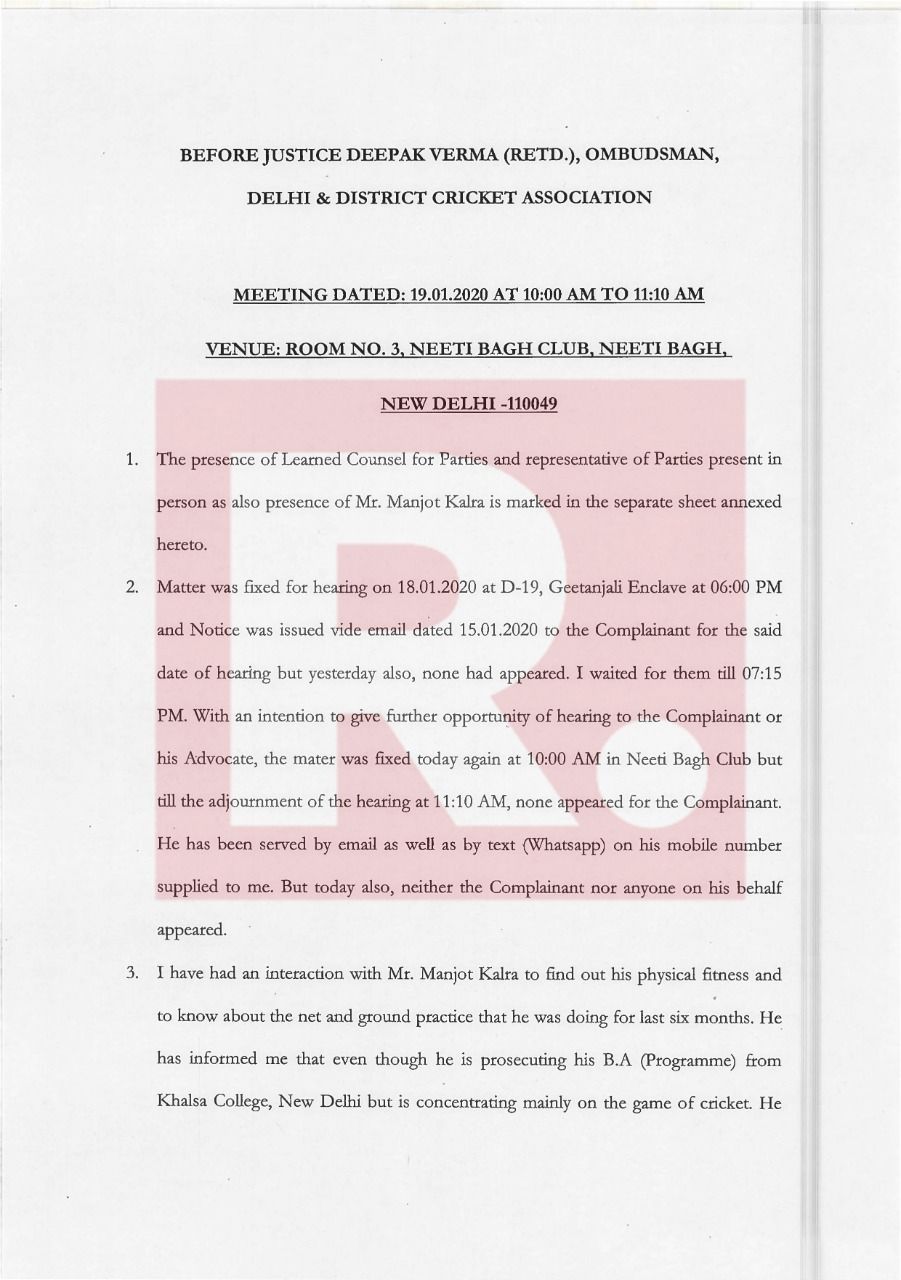 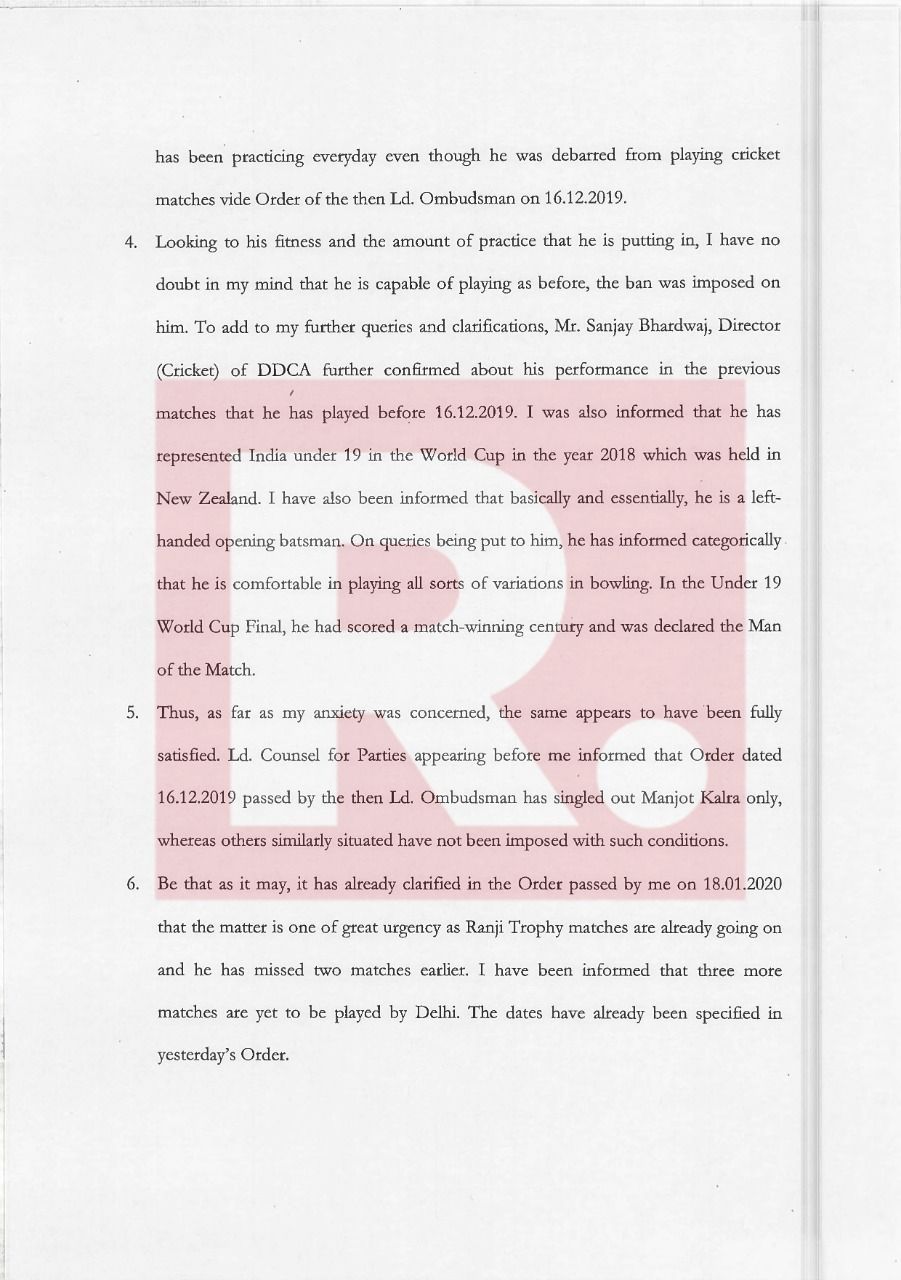 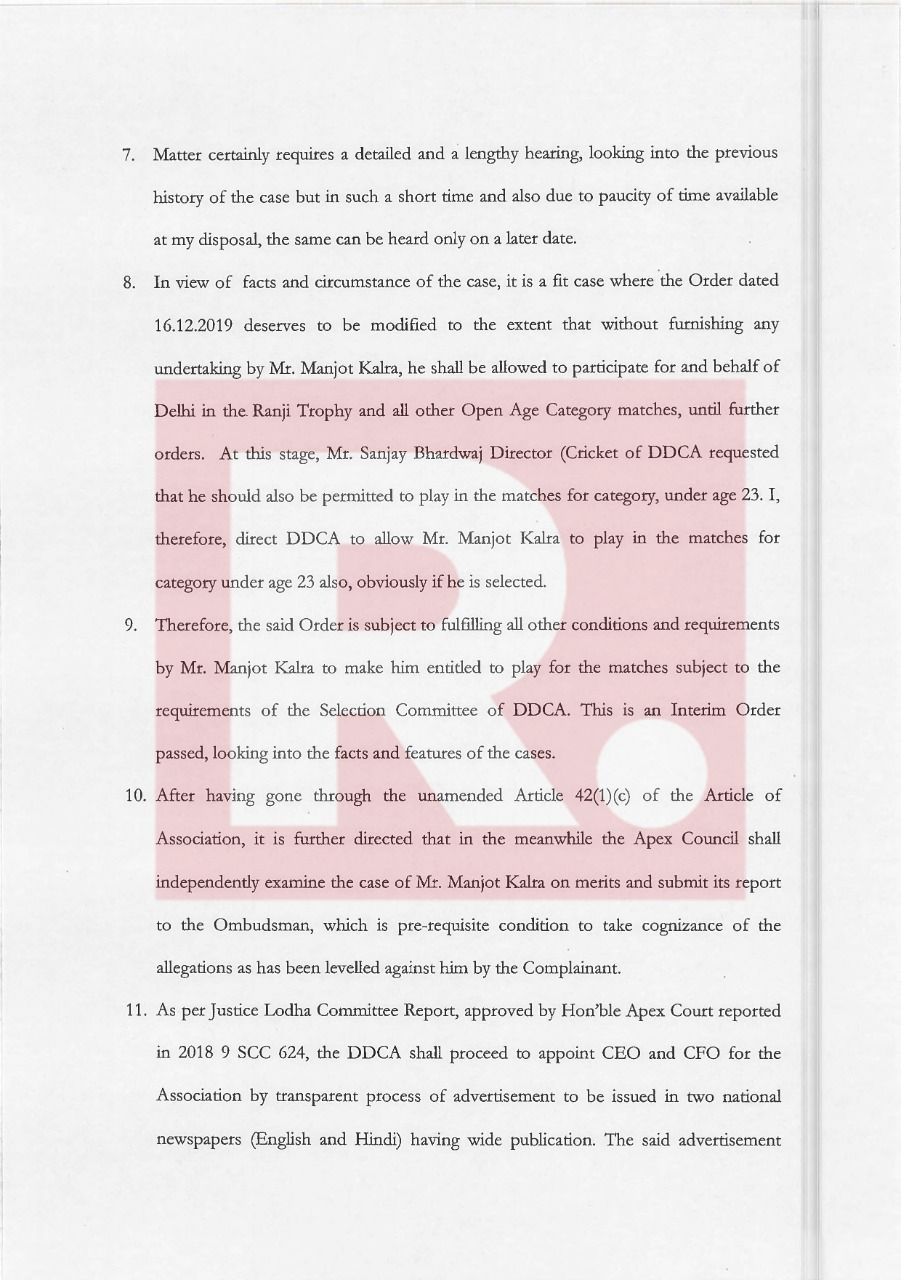 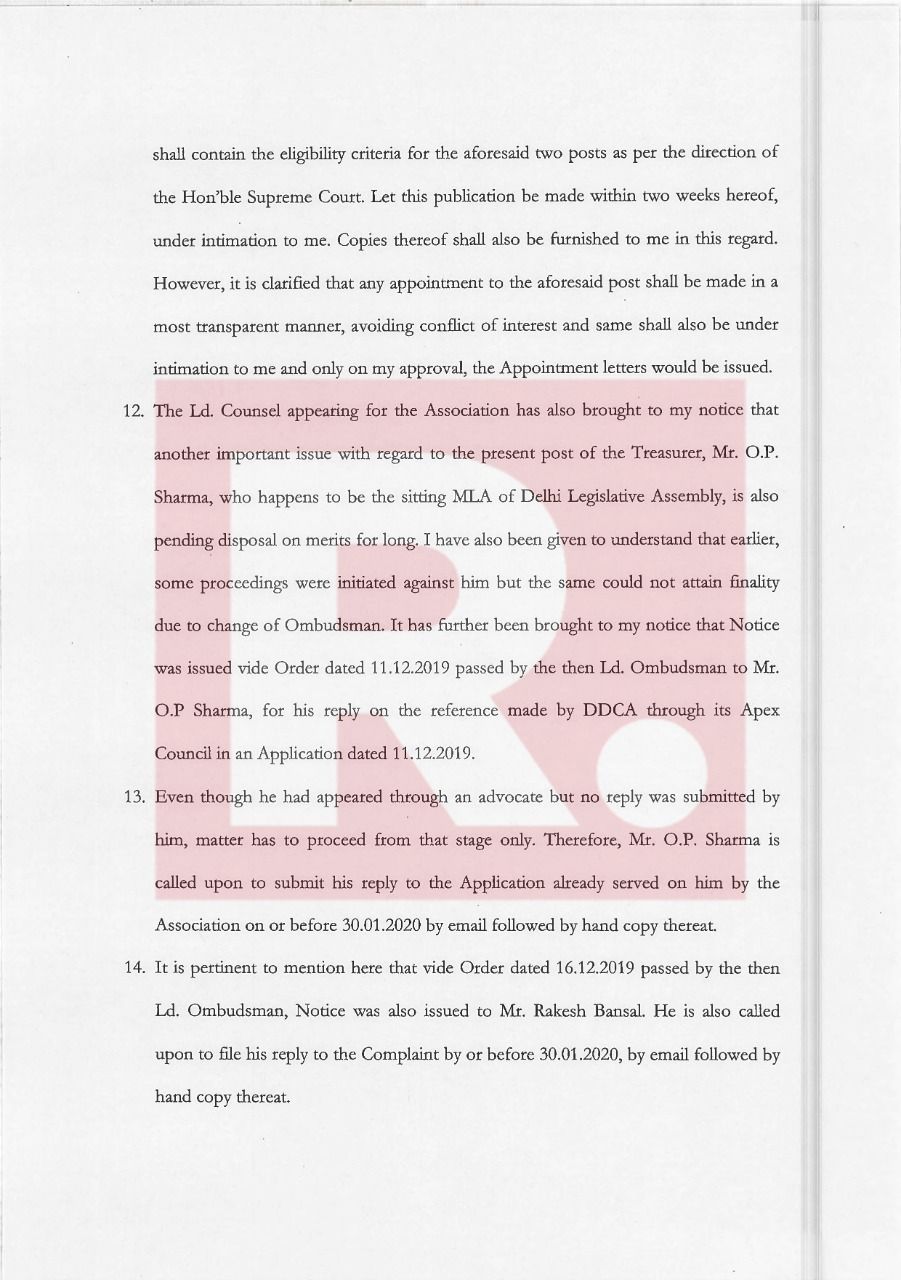 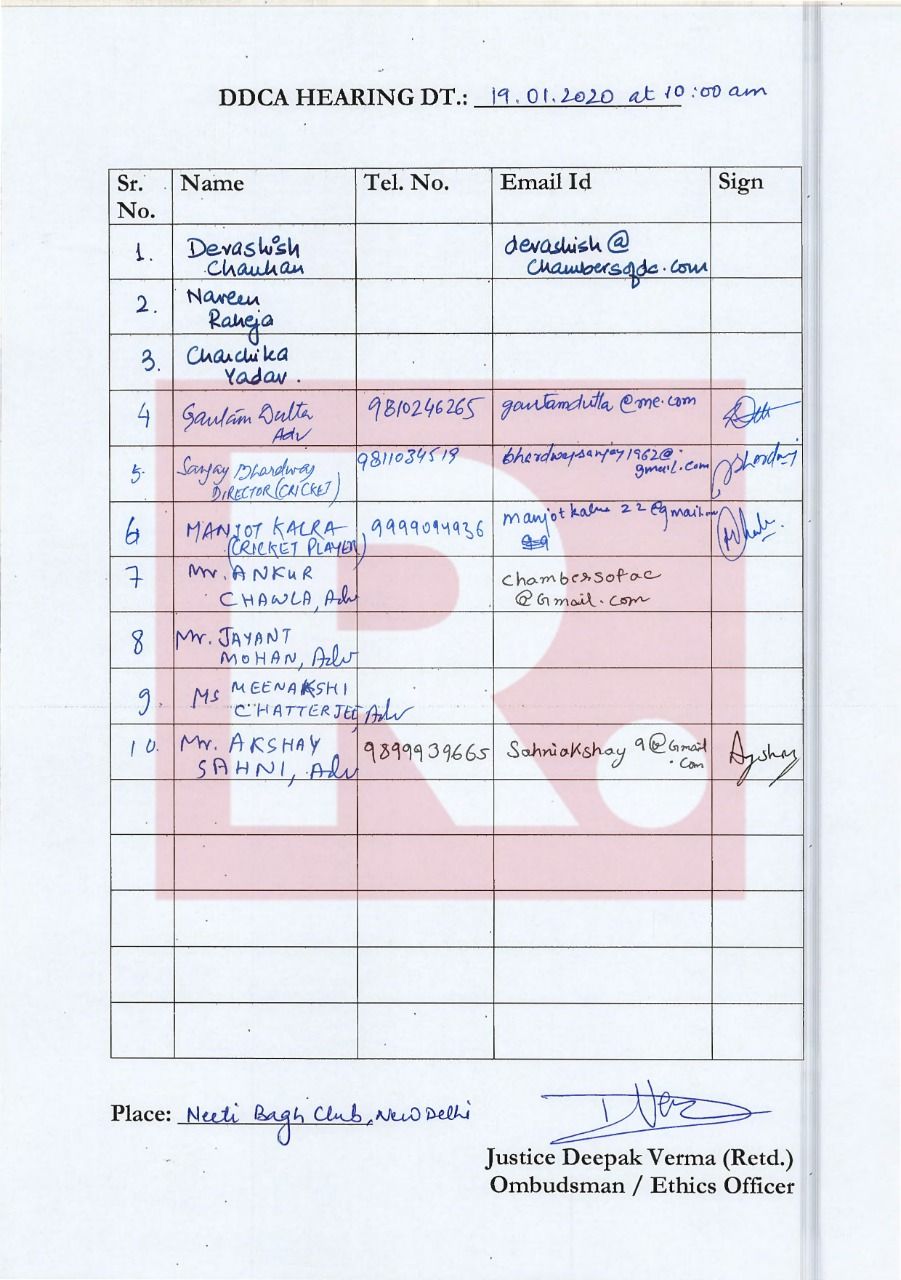 "4) Thus, as far as my anxiety was concerned, the same appears to have been fully satisfied. Ld. Counsel for Parties appearing before me informed that Order dated 16.12.2019 passed by the then Ld. Ombudsman has singled out Manjot Kalra only, whereas others similarly situated have not been imposed with such conditions.

"6. Be that as it may, it has already clarified in the Order passed by me on 18.01.2020 that the matter is one of great urgency as Ranji Trophy matches are already going on and he has missed two matches earlier. I have been informed that three more matches are yet to be played by Delhi.

"9. Therefore, the said Order is subject to fulfilling all other conditions and requirements by Mr Manjot Kalra to make him entitled to play for the matches subject to the requirements of the Selection Committee of DDCA. This is an Interim Order passed, looking into the facts and features of the cases."

READ | 'We'd Like To See Video Proof!': ICC Trolls Fan Who Says He Can Bowl Like Jasprit Bumrah