In a never-seen-before spectacle on cricket field, former Bangladesh skipper Shakib-al-Hassan lost his cool and displayed unprecedented aggression in the DPL 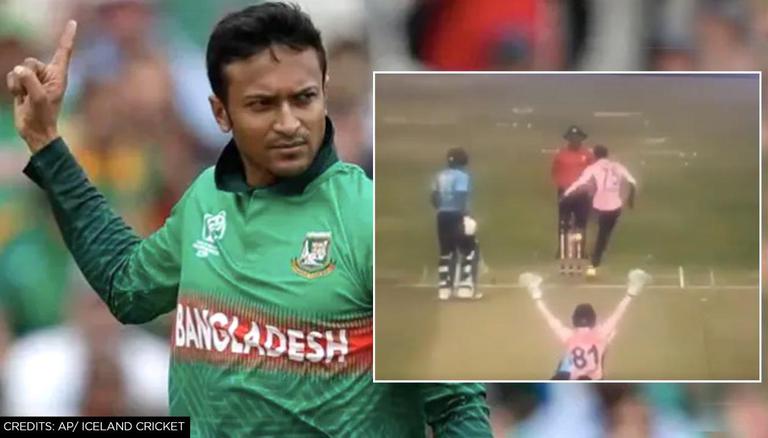 
In a never-seen-before spectacle on the cricket field, former Bangladesh skipper Shakib-al-Hassan lost his cool and displayed unprecedented aggression between the 22 yards on Friday as he led the Mohammedan Sporting Club in the ongoing Dhaka Premier Division Twenty20 Cricket League against arch-rivals Abahani Limited. The former Bangladeshi skipper and veteran all-rounder, while leading the Mohammedan Sporting Club, went on to uproot the stumps not just once but twice as he displayed his strong resentment to the umpires' decision.

Just moments after ferocious display of aggression on the field, Shakib Al Hassan's angry video has gone viral on Twitter even as the match was interrupted by rains. In the first Shakib Al Hassan viral video, the veteran Bangladeshi all-rounder can be seen snapping as the umpire turned down his LBW appeal, and the next moment he goes on to aggressively kick the stumps.

In the second incident, the Bangladeshi all-rounder can be seen walking towards the umpires from one end and goes on to violently uproot the stumps and bang them on the field. The Shakib Al Hassan throwing stumps video has taken Twitter by storm with several users commenting on the viral incident. While one user went on to claim that Shakib's reaction was 'justifed', another netizen compared the incident to Indian skipper Virat Kohli's on-field aggression whereas one called for a 'long ban' on Shakib.

Who’s this?
Is it Shakib al Hasan? pic.twitter.com/kk69rdyyod

One more... Shakib completely lost his cool. Twice in a single game. #DhakaLeague Such a shame! Words fell short to describe these... Chih... pic.twitter.com/iUDxbDHcXZ

They do all kinds of dramas to popularize their tournament.

Long long ban for that.

Shakib is a winner and perfectionist and such people tell frustration when decisions don't go their way. Don't blame him. Reaction was justified

Kohli would never do that .

Shakib Al Hassan has endured a slump in his form in the ongoing Dhaka Premier League. After the first six games, the Mohammedan Sporting Club skipper has scored only 73 runs at an average of 12.16, with a couple of ducks to his name. He failed to go big with the bat during Bangladesh's three-match ODI series against Sri Lanka as well earlier. In the ongoing match against Abahani, he managed to score 37 runs off 27 balls with one four and two sixes before being dismissed.