Deepak Hooda scored a century on Sunday during Vijay Hazare Trophy 2021 tournament and took Rajasthan from 19/5 to 199/10 against Karnataka. 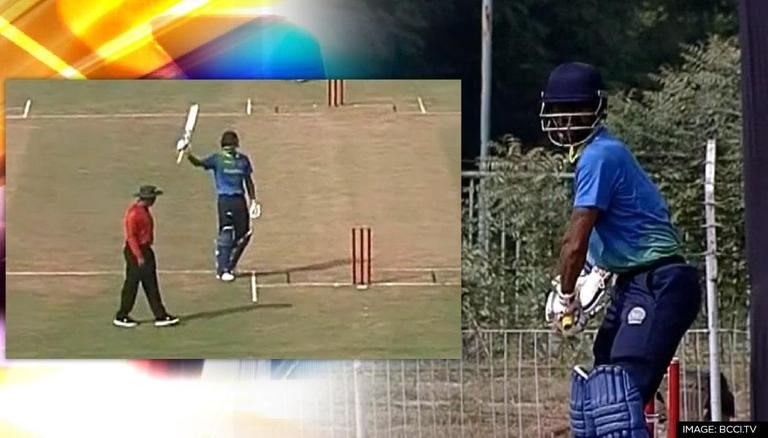 
Indian cricketer Deepak Hooda made headlines on Sunday, by slamming a stellar knock of 109 runs off 109 balls, during the Karnataka vs Rajasthan Vijay Hazare Trophy 2021 match at the K L Saini Stadium, Jaipur. Batting first after losing the toss, Rajasthan found themselves hanging at 10/2 before skipper Hooda made his way out to the middle. The home side further went down to 19/5 within 7.5 overs before Hooda and Sv Joshi stitched a 118 run partnership and took Rajasthan’s score to 137/6 in 29.6 overs.

Joshi walked back after scoring 33 individual runs, while Hooda reached his century off 99 balls, before getting dismissed by Pravin Dubey in the 41st over. Courtesy of the skipper’s knock, Rajasthan finished at a total of 199 runs in the first innings. Indian cricket fans were quick to react to the beautiful knock by Hooda and took to Twitter to express their views.

What do fans have to say about Deepak Hooda's first season with Rajasthan?

Deepak Hooda joined the Rajasthan team ahead of the 2021-22 Indian domestic season, following a fallout with his former team Baroda’s skipper Krunal Pandya. A fan hailed Rajasthan for the inclusion of Hooda into their side and also mentioned it as a loss for Baroda. Another fan mentioned that the 26-year-old player has been consistent in both the T20 and ODI domestic tournaments and expected a good bid for the player in IPL 2022 mega auction. Hooda has scored a total of 198 runs in six Vijay Hazare Trophy 2021 matches while he earlier finished the Syed Mushtaq Ali Trophy 2021 as the highest run-scorer for Rajasthan. He scored a grand total of 294 runs in six matches in the T20 tournament, which included four half-centuries and the best knock of 75* runs. At the same time, there were many other fans, who hailed Hooda for his fantastic knock.

What an inclusion Deepak Hooda has been for Rajasthan side!!
Major loss for Baroda.

Deepak Hooda has been consistent in the middle order in both T20s and ODIs domestic tournaments, has a great chance to get a very good bid for IPL 2022.

The way he is playing right now is just amazing...!

Rajasthan should take that from 19/5 anyday. Unreal innings from Deepak Hooda. Scored 109 off 109 from that situation.

Four wickets for Vyshak. He absolutely ran over the batting order of Rajasthan today. #VijayHazareTrophy

Karnataka in a strong position to win against Rajasthan

On the match front, Karnataka finds themselves at 141/2 after 35 overs of their chase of 200 runs set by Rajasthan. Opener Samarth R returned to the dugout after scoring 54 runs, while no. 3 batter Siddhart KV and skipper Manish Pandey, currently bat it out on the middle. Siddharth has scored 54 runs so far, while Pandey bats on the individual score of 25 runs. Karnataka look to be in a strong position to win the match as they need 58 runs off 15 overs.