Virat Kohli Dances To 'My Name Is Lakhan' On Field Yet Again, Video Goes Viral

During day 4 of the INDvsNZ test match, captain Virat Kohli was seen dancing to the classic Bollywood song in Mumbai's Wankhede Stadium ahead of India's victory 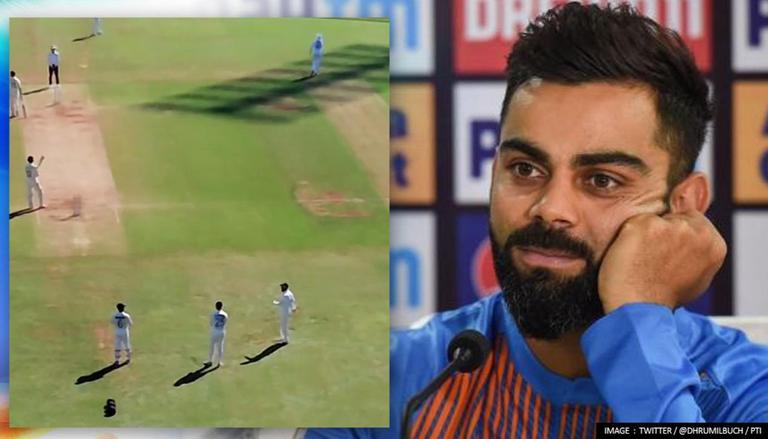 
Team India registered a mammoth 372-run win over New Zealand in the second test match played in the series on Monday. With this, team India won the series on home soil 1-0 and found themselves third in the World Test Championship points table. As the Indian cricket fans celebrated India's formidable victory, a video of skipper Virat Kohli dancing on the field during the match is making rounds on the internet.

Virat Kohli caught dancing to 'My Name is Lakhan' again

Indian test Cricket team skipper, Virat Kohli is known for his aggressiveness on the pitch. The player, who is known to be an intimidating figure for the opposition teams. However, the skipper is also popular for his enthusiasm on the field. Earlier in November, one such incident was on show when the star batsman could not help but groove to the classic Bollywood song playing in the stadium during an ICC T20 World Cup 2021 Super 12 clash. In the video, Virat was seen dancing to 'My Name is Lakhan' song at the boundary rope at the Sheikh Zayed Stadium in Abu Dhabi.

Now, a month later, he has done it again. During day 4 of the INDvsNZ test match, captain Kohli was seen dancing to the same song again. A group of fans present at the stadium in Mumbai an effort to get a reaction from the skipper began singing the song along while recording the whole event. In what is a video that showcases, Kohli’s fun-loving attitude, he is seen making actor Anil Kapoor’s signature step from the song. The skipper quickly took position got ready for the next ball while the fans cheered him on. The video has since gone viral and is being shared by his fans claiming it to be the perfect portrayal of the lovable player.

India beat New Zealand in Mumbai's Wankhede Stadium to win the series 1-0. The Indian bowlers swung the game in the home team’s favour as New Zealand's batting crumbled on Day 4 of the second Test. The Virat Kohli led side registered a massive 372-run win after getting the Kiwis out for a meagre 62 in the first innings, and 167 in the second. Opening batsman Mayank Agarwal won the man of the match and ace spinner Ravichandran Ashwin has won the man of the series awards as India marked its first Test win under new coach Rahul Dravid.

READ | IND vs NZ: Rahul Dravid on team selection for SA tour; 'Something which will challenge us'