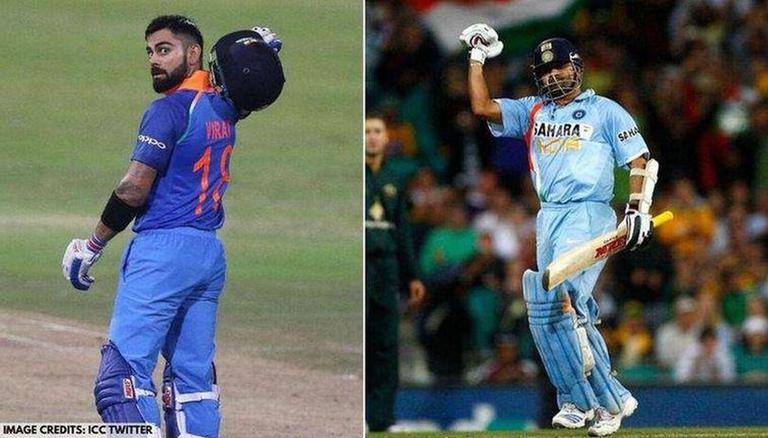 Indian captain Virat Kohli, who is popularly deemed as the heir to India’s greatest batsman ever, Sachin Tendulkar, has been killing records with his consistency and unparalleled hunger to score runs.  When Tendulkar hung his boots, there was a huge void left in the Indian team, which was filled by Kohli. Over the years, we have seen the Indian captain drawing huge comparisons with past players and contemporaries alike.

However, if there's one player who Kohli is compared the most to, it's the 'Master Blaster'. Much like the Sachin Tendulkar records, Kohli has broken a plethora of records which also include several records of the legendary cricketer. This has often led to 'Sachin Tendulkar vs Virat Kohli' comparisons.

"Most no of day's as no1 ODI batsman in ICC ranking"

SACHIN WAS NOT EVEN BEST ODI BATSMAN OF HIS ERA, LOL.
VIRAT KOHLI THE REAL GOAT🔥

Players with better Odi avg than Kohli - None https://t.co/COfMG6tugW

Don't know why #Viratkohli faces backlash when anyone compares him to Sachin . I agree that sachin faced many greats but Virat has not scored only against Minnows he dominated some of the best bowlers in their home conditions , this are some of the bowlers he faced

While the comparisons between the two are inevitable, they are certainly baseless because both players played in different eras. Kohli's induction into the Test team was completely different from that of Tendulkar’s. The Indian captain took nearly three years after his ODI debut in 2008 to get his Test cap, whereas his idol, Tendulkar was a child prodigy, who cemented his place in the national Test team at the age of 16. The Mumbaikar was given his Test cap against Pakistan in Pakistan and became the youngest cricketer to represent India.

Moreover, the Sachin Tendulkar records came against quality bowlers like Curtly Ambrose, Courtney Walsh, Waqar Younis, Wasim Akram, Glenn McGrath, Shane Warne, Muttiah Muralitharan and several others. And while global cricket boasts of talented bowlers even today, they remain unmatched to the unplayable bowlers of yesteryears. Besides, it is also important to state that during the Tendulkar era, some of the modern features of the game, like three powerplays, flatter batting wickets or the review system, were absent.

Notably, Kohli has time and again shunned the 'Sachin Tendulkar vs Virat Kohli' comparisons himself. During an episode of a chat show 'Breakfast with Champions', Kohli dismissed the thought of him being compared to the great Sachin Tendulkar. Kohli had said one can only compare those who are worthy of the comparison. He added that people are comparing him to someone because of whom he started playing cricket in the first place.

READ | Kane Williamson, Rashid Khan set to skip IPL 2021 if held in September; here is why

According to Kohli, he stands no chance in terms of skill level. He reckoned that Tendulkar is the most complete batsman ever and there's no way one can be compared to him. Kohli stated that comparisons are not fair to him because of what he’s given Indian cricket. The dynamic batsman opined that there is no way Tendulkar can be compared to any player from this generation.

The Virat Kohli stats in international cricket composes of some staggering numbers just as the Sachin Tendulkar centuries count. Ever since he made his debut back in 2008, the right-hander has aggregated 22,818 runs across all formats. The Indian captain is currently the only cricketer in the world to simultaneously hold an average of 50-plus in Tests, ODIs and T20Is. With Virat Kohli centuries count of 70, he is third on the all-time list behind the likes of Sachin Tendulkar (100) and Ricky Ponting (71).

Meanwhile, Kohli has an opportunity to overtake Ponting during the upcoming WTC final which will be followed by a five-match Test series vs England. Kohli will lead the India squad for WTC final in Southampton from June-18-22.