ICC on Tuesday launched a Twitter poll asking fans to choose which captain was the best. Pakistan's Imran Khan managed to beat Virat Kohli in a close contest.

The International Cricket Council (ICC) on Tuesday launched a Twitter poll asking fans to choose which captain was the best. The options included Indian team skipper Virat Kohli, former South African captain AB De Villiers, current captain of Australia’s women team Meg Lanning and former Pakistan captain and current PM Imran Khan. The poll showed that the averages of these players improved when they started leading their teams and thus, they are the true 'pacesetters' in modern-day cricket.

Captaincy proved a blessing for some extraordinary cricketers ðŸ§¢ðŸ

Their averages improved as leaders ðŸ“ˆ

You decide which of these ‘pacesetters’ were the best among these geniuses! pic.twitter.com/yWEp4WgMun

While at one point it seemed that Imran Khan was winning the poll, Virat Kohli overtook the former Pakistan all-rounder right at the end as Indian fans started trending the hashtag 'Vote for Kohli' when it seemed like the Indian skipper would lose. It even appeared as though Kohli had the win, but in what screenshots and reactions show as some form of glitch, there was a discrepancy in the pre-final and final counts and when the poll ended, after 536,346 votes were cast, Imran Khan won by 47.3% of votes and Kohli got 46.2% - a very big turnaround in the final seconds. AB De Villiers got 6% of the votes whereas Lanning ended up with 0.5%.

Several Indian netizens have complained and questioned ICC and Twitter on how Imran Khan won the poll as Virat Kohli was leading it a minute before it ended. "How did that change in the last second, Kohli was leading till 11.45 am with 47% and suddenly within 1 second it changed?" Johns, a user asked. Even screenshots shared by users show Kohli having a narrow lead over Imran Khan. 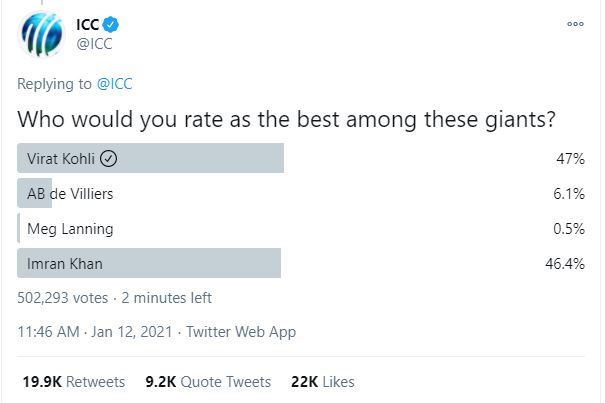 How did that change in last second, Kohli was leading till 11.45 am with 47% and suddenly within 1 second it changed?

Look at this @BCCI ðŸ™„ pic.twitter.com/zmbTwBLE4C

Hey @ICC what is this ?
Are You Doing Poll Fixing or something else Like That ?@TajinderBagga pic.twitter.com/kxLSMjGwJb

God damnn you changed the poll in the last one second.ðŸ˜’ðŸ˜’

I literally have the screenshot pic.twitter.com/pe0f8y3Fw4