Virat Kohli posted some pictures from his practice session on Instagram. Here's what happened next -

Virat Kohli took to his Instagram handle on Friday and posted some pictures from his practice session. As the cricketer posed with a smile in one of the pictures, some users trolled him asking a question, 'When will you win a match for Royal Challengers Bangalore?'.

A few from the practice session yesterday. ✌️ 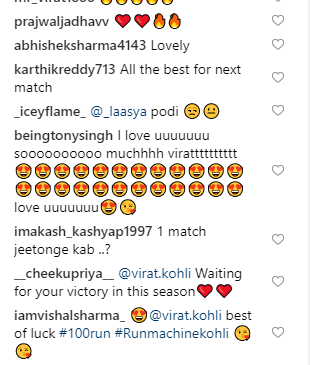 But there were some fans who irrespective of the team's loss wished the cricketer good luck for his next match and also called him 'Little Tendulkar'. One user wrote: "do some more practise to win next matches.', while the other commented: 'umeed pe toh duniya kayam hai. Virat aur abd ka bhi time aayega . Tabh dekhlena' [sic]

For those unaware, the criticism comes after RCB lost 6 consecutive matches in this year's IPL. But legend Sunil Gavaskar in an interview hailed the cricketer and said that his performace in IPL won't affect him. He has faith that Virat will perform for the World Cup as playing for India brings in a complete different excitement and energy.

Talking abot his achievements, Virat Kohli is one of the highest run scorer in IPL alongside Suresh Raina of Chennai Super Kings with 5,151 runs from 169 matches.

He has scored runs at an average of 38.15 and also has four centuries and 35 fifties. While RCB stands at the bottom of IPL table with zero points, fans hope that a win is sure coming for the captain soon.

“He’s one of the best in the world, has broken so many records I don’t think he will be affected by this. He has a different hunger when he plays for India. Everyone is highly motivated to do well in the World Cup. With 5000-plus runs, individually, he’s doing his best. But maybe his team combination is not clicking. Maybe somewhere down the line he’s lacking in team combination. He’s in great touch and if he keeps doing well like that it will be good for India in World Cup.” spinner Kuldeep Yadav was quoted as saying by PTI.