Virat Kohli and Rohit Sharma praised Suryakumar Yadav & Deepak Chahar for their performance and also congratulated the team for their amazing effort. 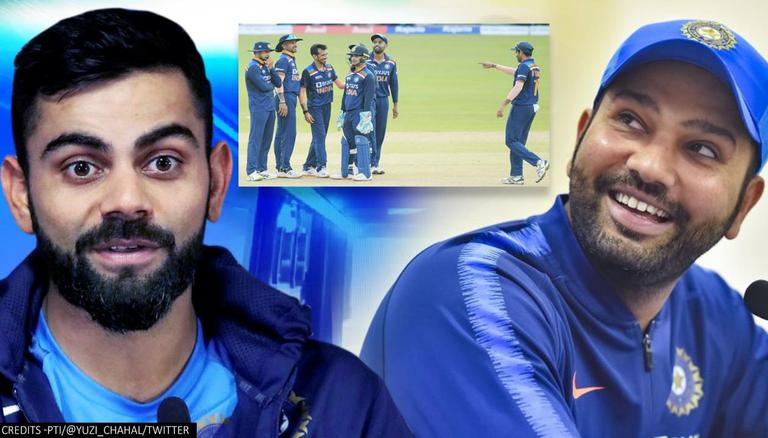 
Team India on Tuesday, July 20, clawed their way back from defeat to win the second ODI against Sri Lanka by 3 wickets.  The win also helped them clinch the three-match series 2-0. Deepak Chahar and Suryakumar Yadav were the stars of team India's win as both the players scored a half-century. Chasing 276 for victory, India had lost half their side for 116 runs, Yadav struck his maiden ODI fifty and then Chahar put up an unbroken 84-run stand with Bhuvneshwar Kumar for the 8th wicket to take India home. Post the win Virat Kohli and Rohit Sharma could not control their excitement and following India's come from behind victory.

Regular team India stars are currently in England preparing for the five-match Test series against the host. Ahead of the Test series, Virat Kohli and co are playing a three-day warm-up fixture against County select XI. While Kohli sat out of the warm-up fixture, Rohit Sharma led the team in Kohli's absence.

Despite being in the middle of the match, the regular skipper (Kohli) was glued to the laptop watching the live streaming of the India vs Srilanka 2nd ODI match. Following the thrilling win, Kohli took to Twitter and praise Suryakumar Yadav and Deepak Chahar for their performance and also congratulated the team for their amazing effort. Rohit Sharma in his tweet praised the team for the solid grit shown by them during the match.

That was some performance by team India. Solid grit shown right through @bcci

Great win by the boys. From a tough situation to pull it off was an amazing effort. Great to watch. Well done DC and Surya. Tremendous knocks under pressure. 🇮🇳

Team India's performance in the warm up match on Day 1

Team India took the field at Durham with regular skipper Virat Kohli after he was advised to rest due to some stiffness in his back on late Monday evening. Ajinkya Rahane, the vice-captain of the team also sat out of the match due to an injury on the left hamstring. The duo is expected to get fit in time for the England series. Coming to Team India's performance on Day 1,the team reached 306/9 at the end of the day's play with KL Rahul scoring a century before retiring, while Ravindra Jadeja also contributed with the bat scoring 75 runs. Pacer Avesh Khan who was playing for County XI suffered an injury on his thumb and was taken for scans.