Watch: Sri Lanka's Match-winning Moment As Bangladesh Gets Knocked Out Of Asia Cup 2022

Sri Lanka trounced Bangladesh by two wickets in the group stage match of Asia Cup 2022 on Thursday and advanced into the Super-4 stage of the tournament. 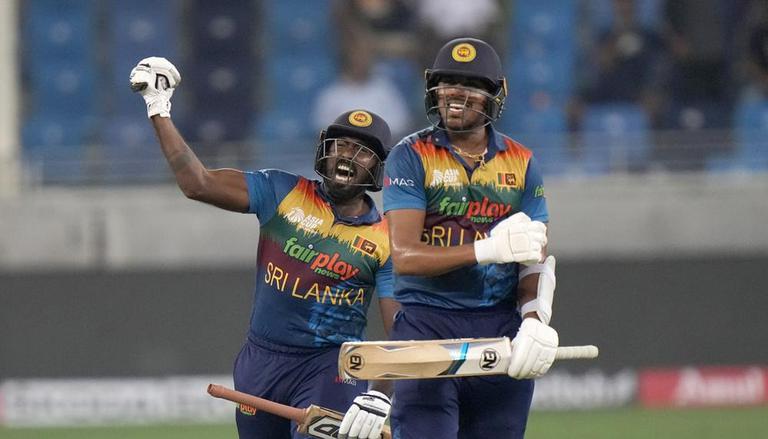 
The Sri Lanka cricket team secured their place in the Super-4 stage of Asia Cup 2022, following a thrilling two wickets win over Bangladesh in the Group B match on Thursday night. Bangladesh failed to defend their first innings total of 183/7 and got knocked out of the race for the Super-4, which resulted in their exit from the tournament. Meanwhile, the Lankan team came up with jubilant celebrations as soon as they claimed the victory after the umpire signalled for a no-ball against Bangladesh off-spinner Mahedi Hasan in the third ball of the final over.

We've still got goosebumps from that one! What a match!😍🤩
Sri Lanka go on to the Super 4 of the DP World #AsiaCup after a breathtaking run chase.👏🏻🔥#SLvBAN #ACC #GetReadyForEpic #AsiaCup2022 pic.twitter.com/a9hNmxMSZf

However, the sound of the no-ball siren was sweet music for the Sri Lanka side, as they left no stone unturned to celebrate the win. While Asitha Fernando and Maheen Theeksana were amped up with their feet on the ground, the other members Lankan team were seen pulling off wild celebrations outside the dressing room. It is pertinent to mention that Sri Lanka became the 2nd team from Group B to reach the Super-4s, while Afghanistan have already secured their place, after consecutive wins against Sri Lanka and Bangladesh.

All the action, all the drama!
Some #Epic 📸's from tonight's action in this #EpicEncounter of the DP World #AsiaCup.#SLvBAN #ACC #GetReadyForEpic #AsiaCup2022 pic.twitter.com/MLaUfSO3BL

What else happened in Sri Lanka vs Bangladesh, Asia Cup 2022 match?

In the first innings of the match, Bangladesh reached a total of 183/7, courtesy of Afif Hossain’s 39 off 22, Mehidy Hasan’s 38 off 26, and Mahmudullah's 27 off 22, among contributions by other players. Chamika Karunaratne grabbed the best figures of 2/32 in 4 overs for Sri Lanka, while Wanindu Hasaranga also contributed with 2/41. Maheesh Theeksana, Dilshan Madushanka and Asitha Fernando also contributed with one wicket each.

What a flourish to finish off the innings!
Sri Lanka were able to pick up some crucial wickets, but Bangladesh achieved a score of 183/7, their highest total in Dubai.
Sri Lanka need 184 to win!#SLvBAN #ACC #GetReadyForEpic #AsiaCup2022 pic.twitter.com/8CRAKHRGiJ

Chasing the total, Sri Lanka reached the score of 45/0 in 5.2 overs, before Pathum Nissanka’s dismissal in the next delivery. Opener Kusal Mendis scored the maximum runs for the Lankan side with 60 runs in 37 balls, while captain Dasun Shanaka hit 45 off 33. While Chamika Karunaratne was run-out on 16 off 10, Fernando remained unbeaten on 10 off 3 deliveries, with Theeksana on the other end.

Sri Lanka was awarded the win with four balls remaining in the match, as they stormed into the Super-4 stage in fashion. While the Lankan team now joins Afghanistan in the Super 4s from Group B, India have reached the knockout stage from Group A. The Hong Kong vs Pakistan match on Friday will now decide, who among the two teams will join India in the next stage.