Following the completion of the intra-squad match, Team India will not have any warm-up fixture before taking on New Zealand in World Test Championship final. 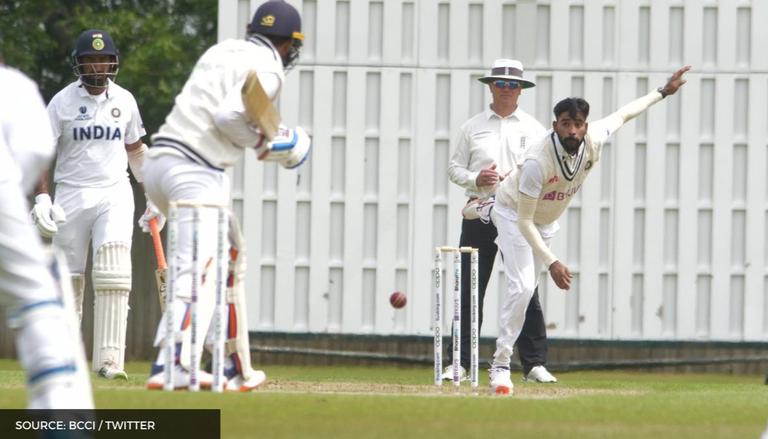 
With just a week to go before the WTC Final 2021 gets underway, Team India cricketers have already begun their preparation with an intrasquad match. The Board of Control for Cricket in India on Friday shared snaps of the practice match on its social media handles. Earlier the cricketers were in quarantine, first in Mumbai and then in isolation after their arrival in England.

Ahead of the WTC final 2021 Kane Williamson-led New Zealand team will have the advantage of knowing the conditions better due to the ongoing test series against England. The same cannot be said about Virat Kohli & co. who will not have any warm-up fixture before the IND vs NZ final. Earlier BCCI had posted a video of the Indian players sweating it out in nets. In the video, the likes of Cheteshwar Pujara, Ajinkya Rahane, Rohit Sharma, Rishabh Pant, skipper Virat Kohli and bowlers Jasprit Bumrah, Mohammed Shami and Ravichandran Ashwin could be seen having an intense training session.

📸📸 Snapshots from the first session of our intra-squad match simulation here in Southampton.#TeamIndia pic.twitter.com/FjtKUghnDH

The winner of the high-voltage India vs New Zealand match will be crowned the maiden World Test Championship winners. For Kohli, this is a golden opportunity to lift his maiden ICC trophy. Under Kohli's captaincy, Team India is yet to win a single ICC event and the WTC presents them with an opportunity to bring an end to their ICC trophy drought. On the other hand, Kane Williamson will not let go of the opportunity to win an ICC trophy having lost two 50-over World Cup finals. With a shot at glory awaiting both teams, they are expected to go out all guns blazing.

Ahead of the all-important clash between two heavyweight teams on English soil, let's take a look at the India vs New Zealand h2h record. Both teams have faced each other 59 times and it is India who have the upper hand over their Kiwi opponent. In the 59 Test matches, India have managed to win 21 of them, while the New Zeland team have emerged victorious in 12 matches. There have also been 26 matches that ended in a draw.

The India team vs NZ WTC Final is scheduled to take place from June 18-22 and the match will start at 3:30 p.m. IST. After concluding the India vs New Zealand WTC Final, the India squad for WTC Final will face England in the India vs England Test Series that will consist of 5 Test matches starting from August 4 at Trent Bridge.