With a win over Afghanistan and 2 unlikely defeats against Pakistan and NZ, can Virat Kohli aim for his maiden ICC trophy before he steps down as the captain? 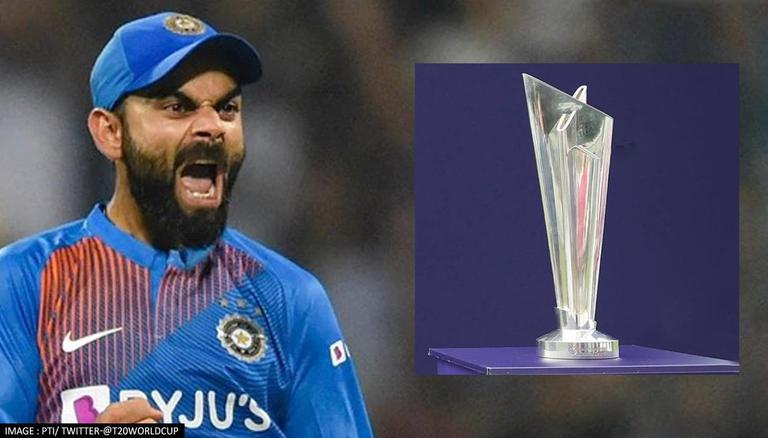 
Entering the grand T20 World Cup as favourites, Team India was expected to thump past Group B swiftly and with relative ease to storm into the semi-finals. Given the Men In Blue's 'knockout curse' under Virat Kohli and Ravi Shastri, it was presumed that the big tests would come at business end of the tournament as India are well stocked in terms of talent, with the likes of Rohit Sharma, Jasprit Bumrah and the 'best reader of the game' MS Dhoni, who has been appointed as the mentor for the marquee event.

However, it's not gone to plan so far, leaving the Men in Blue on the cusp of another heartbreaking exit from an ICC tournament earlier than expected.

A costly defeat at the hands of Pakistan in the tournament's opener and the haphazard performance against the Kiwis in the second game has left India hanging on by a thread in the T20 World Cup. The Men In Blue did announce their arrival at the biggest stage in the match against Afghanistan, where Kohli's men left no opportunity to assert their dominance, to salvage what's left of their pride and also to re-ignite their almost burnt out candle. But maybe, that came a little too late.

With a 66-run victory over Afghanistan and two unlikely defeats against Pakistan and New Zealand, can Virat Kohli aim for his maiden ICC trophy before he steps down as the T20 captain of Team India?

Can India qualify for the semi-finals?

Pakistan have virtually sealed their berth in the semi-finals by grabbing wins in all four matches they've played so far and suddenly, they seem to be favourites to lift the cup. The race for the second qualifier from Group 2 appears to be a three-legged one, with Afghanistan, India and New Zealand in the fray. However, the Kiwis, on paper, stand a better chance to qualify.

For India to qualify, not only do they need to win the remaining matches against Scotland and Namibia, but they also need some luck to go their way, which at the outset doesn't seem to favour skipper Kohli given his toss record. And if that's not enough, India are generally put into bat first and then have to defend under dewy conditions. The Men in Blue will have to register thumping victories in both the remaining fixtures to grab the Net Run Rate cookie and edge past New Zealand and Afghanistan.

Assuming India succeed in winning the remaining two games against Scotland and Namibia, and that too by a hefty margin, it still would need the Gods to be kinder as progress would then depend on New Zealand.

What India need in order to enter semi-finals

On the eve of the match against Scotland, Ravichandran Ashwin joked about lending Team India's physio to Afghanistan, pinning hopes on the return of Mujeeb Ur Rahman. Ashwin's pin-point humour might have just resembled the support Team India and Indians will have for Afghanistan when they step out to face New Zealand on November 7.

READ | T20 World Cup, India vs Scotland: Top 5 Scottish players who can be a threat to India

Apart from the support, if Team India could lend a bit of MS Dhoni's tactical mastery and some players as well. Well, that's how desperately Team India would want Afghanistan to defeat New Zealand. However, before Afghanistan, Indians will be placing their bets on Namibia to pull off probably the greatest heist ever and punch above their weight when they face the 2019 ICC World Cup finalists on November 5. Mind you, by all means, minnows Namibia might just do so because cricket, whatever said and done, still remains unpredictable.

To summarise the glimmer of hope that India have of qualifying, they will have to win both the remaining matches, and by a large margin, to ensure a higher Net Run Rate. At present, India's NRR stands at +0.073 whereas New Zealand's NRR is +0.816 (before their game against Namibia).

If India win all the remaining matches to reach 6 points, they will hope that either Namibia or Afghanistan defeat New Zealand. At the outset, Kohli & co. have the firepower to pull of the stunt, but all they need is the determination to do so and a little bit of luck.