Why Was No Super Over Played Out Despite India Vs New Zealand 3rd T20I Ending In A Tie?

With the third India vs New Zealand T20I ending in a tie on Tuesday, the Men in Blue clinched an outstanding 1-0 series victory over the Blackcaps. 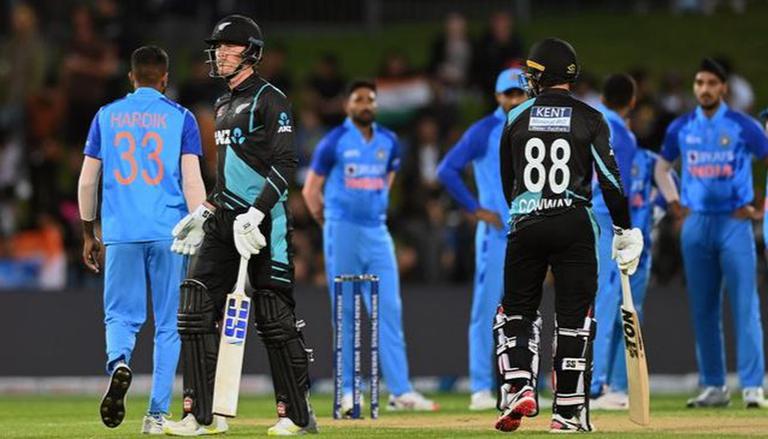 
With the third India vs New Zealand T20I ending in a tie on Tuesday, the Men in Blue clinched an outstanding 1-0 series victory over the Blackcaps. The Hardik Pandya-led side won the second match of the three-game series, the only clash where there was a definite result after the first T20I was washed out completely.

As for the third and final match, there was an abrupt ending. The scores ended level at 75 via the D/L method after the game was abruptly abandoned due to rain at the end of nine overs during India's chase. Most often when a T20I ends in a tie, a super over is witnessed but this match was an exception.

Arshdeep Singh and Mohammed Siraj stopped New Zealand in its tracks with game-changing spells to help Team India tie the rain-marred third and final T20 via the Duckworth-Lewis method to claim the three-match series 1-0 on Tuesday. Arshdeep and Siraj fired in tandem and shared eight wickets between them as India bowled New Zealand out for 160 in 19.4 overs after the hosts elected to bat first.

New Zealand were going strong at 130 for two in the 16th over but Arshdeep (4/37) and Siraj (4/17) led India's remarkable comeback. The hosts lost eight wickets for just 30 runs after Devon Conway (59 off 49 balls) and Glenn Phillips (54 off 33) had propped up their innings. In reply, India were precariously placed at 75 runs for the loss of four wickets when rain stopped play. It was a DLS par-score at that time. Since the game never resumed, the match ended in a tie.