Chris Gayle's 14,000 runs are the most by any batsman in the shortest format of the game, with the next-placed hitters remaining over 3,000 runs behind. 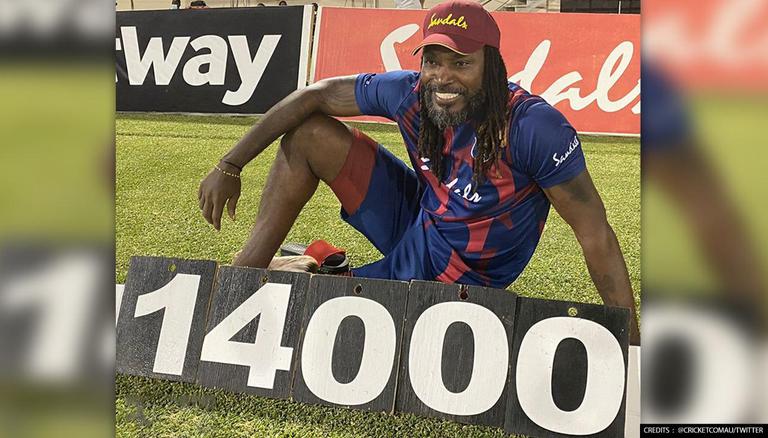 
Legendary West Indies batsman Chris Gayle on Monday became the first cricketer in the world to reach a whopping 14,000 runs in the shortest format of the game. Gayle reached the amazing milestone while playing in the third T20I match against Australia at Daren Sammy Stadium in St Lucia. The 42-year-old cricketer registered the feat in style as hit Australian spinner Adam Zampa for a six in the ninth over of the second innings. Gayle also scored a quick 67 off 38 balls to help his side win the match and seal the five-match series 3-0.

“Don’t mind the numbers ... you guys should be happy to see Chris Gayle on the field still. Hopefully Chris will last as long as possible. Cherish those moments ... just respect the Universe Boss and let him play cricket and have some fun,” says Chris Gayle #WIvAUS pic.twitter.com/T82uZ1Es4g

Gayle plays for various teams in franchise T20 cricket all over the world, including in the cash-rich Indian Premier League, where he is regarded as one of the best batsmen. In T20 cricket, Gayle holds the record for most hundreds with 22, 15 more than his next competitor, Brendon McCullum. Gayle's 14,000 runs are the most by any batsman in the shortest format of the game, with the next-placed hitters Kieron Pollard and Shoaib Malik remaining over 3,000 runs behind the Jamaican superstar.

As far as the third T20I match is concerned, the Nicholas Pooran-led side convincingly beat the Kangaroos by 6 wickets with 31 balls to spare. Batting first, Australia got off to a good start as veteran openers Matthew Wade and Aaron Finch put up a 41-run partnership before the former was dismissed by Obed McCoy for 23 runs. Mitchell Marsh, who looked in good touch in the first two games against the West Indies, couldn't get going as he was trapped lbw by Fabian Allen for just 9 runs. Alex Carey was then dismissed by Hayden Walsh Jr., who also took the Australian captain Aaron Finch's wicket in the same over.

Moises Henriques and Aston Turner added some crucial runs for Australia batting down the order as they scored 33 and 24 runs respectively. No Australian batsman hit a six during the course of their entire innings, except for top-scorer Henriques, who did it twice. Earlier, Australia had won the toss and elected to bat first, which later seemed to be a wrong decision on part of Finch as they couldn't capitalise on the good start.

When the West Indies side came to bat in the second innings, Australian bowler Mitchell Starc provided an early breakthrough as he picked opener Andre Fletcher's wicket for just 4 runs. Lendl Simmons was the next batsman to be dismissed as he was sent back by Riley Meredith for 15 off 13 balls. Chris Gayle and Nicholas Pooran seized command and led the Windies closer to the target before Meredith dismissed the former. Pooran remained not-out at 32 off 27 and finished the game with Andre Russell by his side.