World Cup 2019: Fans Channel Rain Frustration Through Vibrant Memes, Give ICC A Piece Of Their Minds

India was slated to take on New Zealand in a match on Thursday in the ongoing cricket world cup in England, but it was washed out owing to rains.

The frustrating English weather finally caught up with the Indian team as their third World Cup game against New Zealand was called off without a ball being bowled here Thursday.

New Zealand now have seven points from four games while India now have five from three with the next game against Pakistan in Manchester on Sunday.

Incidentally, the weather Gods are threatening to play spoilsport over there too. The toss was delayed due to inclement weather and in the end it never took place. An inspection was to happen at 3 pm IST, the scheduled start time, but was put off after it started raining again.

The outfield was pretty wet after heavy showers in the past two days. The umpires had one last inspection at 7:30pm IST before taking the decision to abandon the match. This was the fourth such game in the ongoing tournament that has not yielded any result, something that will certainly increase ICC's worry.

Expressing their frustration and anger, Netizens started #ShameOnICC on Twitter, which is currently trending on No 2 in India with over 3,000 tweets. 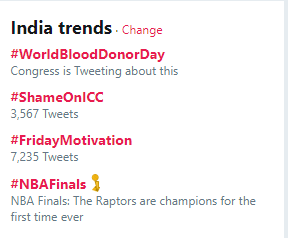 While some blamed the International Cricket Council for their poor management and planning, the others made some hilarious memes on the weather conditions and the World Cup tournament. Check out some reactions below -

remember the Ind vs NZL T20 held on 7th Nov 2017 in Trivandrum, India in which the game started within half an hour after the heavy 5 hrs rain. What a pathetic condition for the stadiums in ENG even they are developed country. ICC has to be more vigilant. #ShameOnICC #ICCWC2019 pic.twitter.com/vPdgFqhNmM

Latest Pics coming out of UK:

@ICC should have so many better options to stop rain 😁 ,But they are not willing to doing anything.#ShameOnICC pic.twitter.com/gaKtXNUZVi

While both the teams share a point each, the practical difficulties of not having a reserve day as stated by the ICC CEO David Richardson is certainly leaving the fans, especially the Indians high and dry.

I know weather Gods no one can control...but better planning should have been there #ShameOnICC #CWC19 ... also there was a hue n cry for India playing Pakistan earlier... no one officially commented ... But God may do his bit !