While the comment section was filled with the questions asking about the hand on Rishabh Pant's Shoulder, the official handle of Mumbai Indians did not miss a chance to take a dig and increase the suspense over the matter

Netizens are trying to fathom the mystry of the hand on Rishabh Pant's shoulder in the picture posted by Hardik Pandya. Adding on to the mystry, Mumbai Indians has also asked the same question.

After securing its position in the Semi Finals of World Cup 2019 by defeating the Tigers by 28 runs, the Men In Blue spend some fun time in England. Tweeting a picture of their outing, Hardik Pandya said that it was boys day out. India has played a total of India has played a total of 8 matches and won 6 of them. The only match that it lost was against England where the host defeated the Men in Blue by 31 runs. The points scored by India is 13 which is only one point less to Australia who is leading the score table.

As Hardik Pandya tweeted the picture with MS Dhoni, Jasprit Bumrah, Mayank Agarwal and Rishabh Pant, thing that caught the attention of the netizens was the mysterious hand on the shoulder of Rishabh Pant. While the comment section was filled with the questions asking about the hand, the official handle of Mumbai Indians did not miss a chance to take a dig and increase the suspense over the matter.

In the picture while Rishabh Pant is standing just behind Dhoni, Agarwal and Bumrah can be seen standing far from him. Mumbai Indians posted the picture with a caption that one who figures out whose hand is on Rishab Pant’s shoulder will get 2 points. The guess agme began just then with people commenting hilariously.

Here is the picture and some of the comments on Hardik Pandya's feed:

2⃣ points to those who figure out whose hand is placed on @rishabpant’s shoulder 🤔🧐 . #OneFamily #CricketMeriJaan #CWC19 #TeamIndia

Here are few tweets that led Mumbai Indians to pick up the issue: 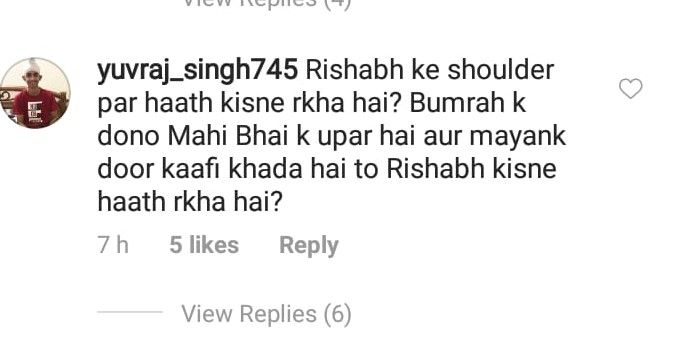 Youngster Rishabh Pant who made his debut at the World Cup against England on 30 June at Edgbaston, Birmingham replaced injured Shikhar Dhawan in the tournament. The wicket-keeper batsman Pant made his ODI debut in late 2018 and has only featured in five ODI's. He has amassed 93 runs with his highest individual score being 36. At the same time, Pant also provides a handy option as a wicket-keeper as well as India already have the services of two wicket-keepers, MS Dhoni and Dinesh Karthik.

READ:"Valuable contribution to our meme ammunition": As Rishabh Pant tries to hit his bat for six, netizens have some fun