Prior to the commencement of ICC Cricket World 2019, all the captains of the 10 participating teams met Queen Elizabeth and Prince Harry at the Buckingham Palace in London on Wednesday.

Prior to the commencement of ICC Cricket World 2019, all the captains of the 10 participating teams met Queen Elizabeth and Prince Harry at the Buckingham Palace in London on Wednesday. The Queen also took pictures along with all the 10 captains. The Board of Control for Cricket In India shared this image. Take a look.

The 10 #CWC19 Captains with the Queen. pic.twitter.com/cT42NfuPCv

The captains were also seen interacting with Prince Harry. At the same time, the prince had a special interaction with Australian skipper Aaron Finch. While it should not be surprising to the cricket fans all over the world that Australia and England's cricketing rivalry dates back to ages, the Duke of Sussex tried to involve in friendly banter with Finch. As per the media reports, Prince Harry asked Finch  "You're getting on a bit now, aren't you?" Harry then asked the Aussie opener since how long was he playing. However, the 2015 World Cup-winner took this banter in the right spirit and replied that he has been playing at the international level since the last eight years. Finch also went to tell Harry that England and India are the favourites to win the showpiece event.

READ: Captains meet Queen Elizabeth before the commencement of CWC'19

Here's the image of their interaction. 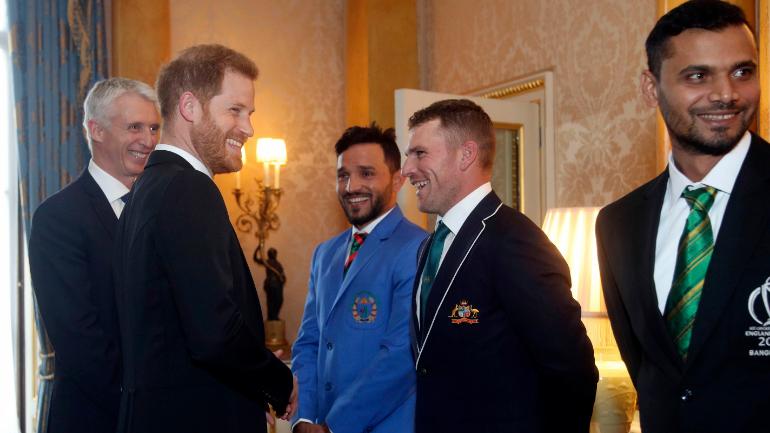 The Queen had also interacted with Indian skipper Virat Kohli. The image was posted by BCCI.

The visit came just before the opening ceremony held at the London Mall next to the Buckingham Palace.

A unique 60-second challenge was played during the opening ceremony in which all teams were given one minute to score the maximum runs.

England takes on South Africa in the opening match of the World cup today at the Oval in London.