WTC Final 2021: Virat Kohli's men have completed their hotel quarantine and on Thursday the Indian team had their first group training session in Southampton. 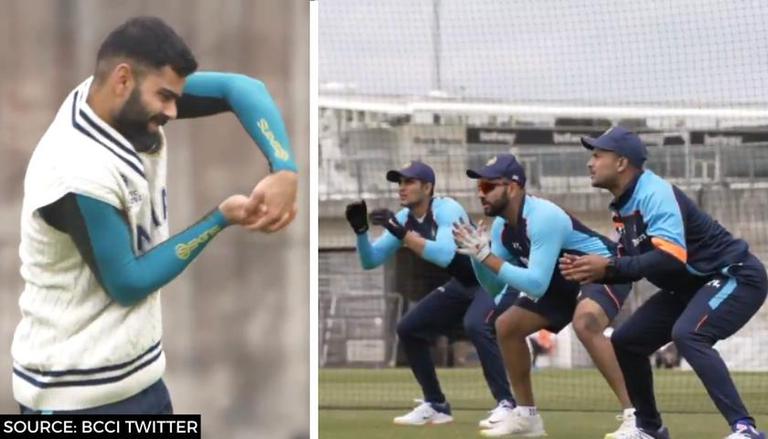 The high-octane World Test Championship Final will see India lock horns with New Zealand where the two sides will compete to establish their authority in the purest format of the game. With the all-important India vs New Zealand WTC Final 2021 fast approaching, both sides are leaving no stone unturned in their preparations. While the Kiwis are in the middle of a Test series against England, the Indian team has hit the ground running as they gear up for the ultimate showdown.

Virat Kohli's men have completed their hotel quarantine and on Thursday, the Indian team had their first group training session in Southampton where the IND vs NZ WTC Final is going to be played. The official Twitter handle of the BCCI took to the micro-blogging site and shared a montage video of India's training session. In the video, the Men in Blue are seen toiling hard on the field as they were involved in a gruelling net session, as well as, some fielding drills.

We have had our first group training session and the intensity was high 🔥#TeamIndia's 🇮🇳 preparations are on in full swing for the #WTC21 Final 🙌 pic.twitter.com/MkHwh5wAYp

The IND vs NZ WTC Final will be played from June 18-22 at the Ageas Bowl in Southampton. A Reserve Day (June 23) has been set to ensure five full days of play. The Reserve Day will only be used if lost playing time cannot be recovered through the normal provisions of making up lost time each day. Notably, there will be no additional day’s play if a positive result is not achieved after five full days of play and the match will be declared a draw in such a scenario.

The winner of the high-voltage India vs New Zealand game will be crowned maiden World Test Championship winners. Notably, under Kohli's captaincy, Team India haven't managed to win a single ICC event. The Men in Blue have a golden opportunity to put an end to their ICC trophy drought by beating the Kiwis.

READ | Dinesh Karthik bets for Shubman Gill to do well in WTC Final, says 'he is ready for sure'

READ | Ajinkya Rahane explains his role as vice-captain ahead of WTC final, says 'Important to..'

The India squad for WTC final is pretty solid but one major conundrum before Virat Kohli will be the opening combination for the game. While Rohit Sharma is a sure starter, there are several candidates like Shubman Gill, Mayank Agarwal and KL Rahul who are competing to partner the Mumbai Indians skipper at the top. It is worth mentioning that Mayank was a regular opener for India but he was dropped during the Australia tour after he failed to perform in the first two Tests.

On the other hand, Shubman Gill who impressed during the tour Down Under had an underwhelming series against England which is why it will be interesting to see who Virat Kohli chooses to open with. Moreover, considering the seam-friendly conditions in England, the Indian team management has a big decision to make about the bowling combination. While R Ashwin, Jasprit Bumrah, Mohammed Shami and Ishant Sharma are likely to make the playing XI, only one among Ravindra Jadeja and Mohammed Siraj will make the cut.