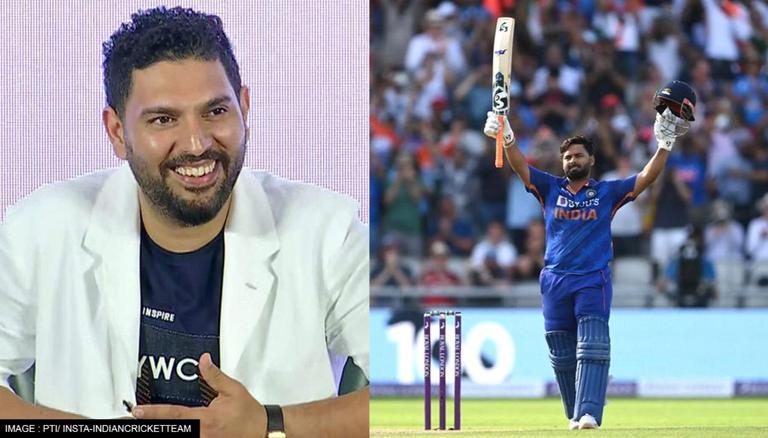 
Rishabh Pant has made it a habit of coming good during crunch games and the ENG vs IND 3rd ODI was no different. The wicketkeeper batsman smashed an unbeaten 125 runs off 113 balls to help India achieve a ODI series victory in England. While the entire world went gaga over Pant's match-winning knock former Team India all-rounder Yuvraj Singh made a tweet regarding his conversation with Rishabh Pant.

Yuvraj Singh in his tweet wrote, "Looks like the 45-minute conversation made sense!! Well played @RishabhPant17. That's how you pace your innings. @hardikpandya7, great to watch #indiavseng,". The tweet was an indication that he did have a 45-minute conversation with the Team India wicketkeeper-batsman which resulted in the outcome.

Looks like the 45 minute conversation made sense 😅!! Well played @RishabhPant17 that’s how you pace your ininings @hardikpandya7 great to watch 💪 #indiavseng

The win for Team India was even sweeter since it came four days after the 20th anniversary of the Men in Blue's famous win at Lords. Team India under the leadership of Sourav Ganguly back then had defeated  England in the 2002 Natwest Trophy final. Yuvraj Singh and Mohammad Kaif were the architects of the historic victory as India chased down the huge target of 326-run runs. The match is also remembered for Sourav Ganguly's shirtless celebration on Lord's balcony.

Hardik Pandya contributed in a major way in Team India winning the final ODI. Besides picking up four wickets, Pandya played a crucial knock of 71 runs in 55 balls which eased the pressure from the batting unit. The duo put up a match-winning partnership of 133 runs taking the Men in Blue across the finish line. The all-rounder was full of praise for Pant and during the post-match talk he said, "It is always very good to contribute in all departments. I think that has given me a lot of confidence in the past, it adds more layers to my game and to my confidence. And Rishabh... his innings was very important for us, the partnership as well and obviously the way he finished, we all know what kind of a talent he has. It is just when it comes out, it is very easy to the eye, and also gives a lot of people... "But at the same time, it gives the eyeballs as well... all the kinds of shots he plays,"