Ziva was seen following her father MS Dhoni during CSK's recent team dinner bonding ahead of the upcoming phase 2 of the IPL 2021 in UAE. 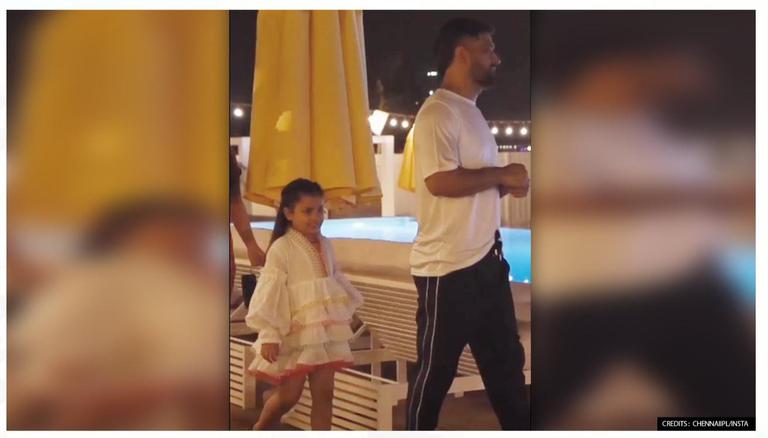 
It seems that MS Dhoni might be in the perfect frame of mind ahead of the second phase of the IPL 2021 that gets underway on September 19 in the United Arab Emirates (UAE) where, he would be leading the Chennai Super Kings (CSK) from the front.

Before he makes an impact on the cricket field for the second time this year, Mahendra Singh Dhoni was the center of attention recently, and it was not for his unique batting or keeping techniques but for an adorable reason.

It so happened that the three-time IPL champions had bonded over dinner on Saturday, August 28. The get-together also saw many of the players' kids enjoying themselves as well. However, the focus was on MS Dhoni's little princess Ziva and what really stood out here was that Ziva was seen following her father in an adorable video posted by CSK on social media.

Prior to its temporary suspension, the Chennai Super Kings (CSK) had occupied the second spot in the IPL 2021 points table with five wins, two losses from their seven matches, and 10 points to their tally. Meanwhile, MS Dhoni has not been up to the mark with the bat as he has only managed to amass 37 runs from seven games so far at an average of 12.33 and a strike rate of 123.33.

The former Team India skipper would be hoping to make a statement during the second phase of IPL 2021 as CSK  look to win the marquee tournament for the fourth time.

The second leg of the Indian Premier League (IPL) 2021 edition will begin with the blockbuster clash between defending champion Mumbai Indians and MS Dhoni-led Chennai Super Kings. The final match of the league stage will be played between Royal Challengers Bangalore and Delhi Capitals on October 8. The knockout stage of the premier T20 competition will begin on October 10 with Qualifier 1 taking place in Dubai, the Eliminator and Qualifier 2 in Sharjah on October 11 and 13, respectively.

A total of 31 matches will be played in the given time frame with the final being played on October 15.