AC Milan players celebrated their Champions League qualification after defeating Atalanta 2-0 and claiming the 2nd spot on the final day of Serie A. 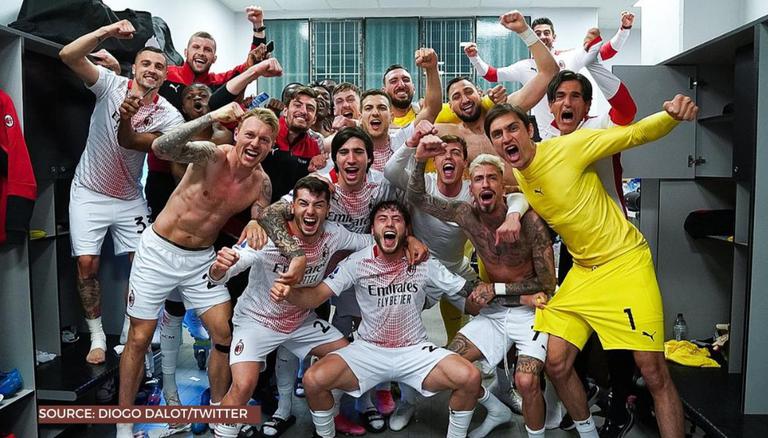 AC Milan managed to cement a Champions League spot for themselves on the final day of the ongoing Serie A season with the Rossoneri defeating Atalanta by 2-0 and moving up to the second spot on the Serie A table at the end of the final matchday in Italy's top-flight this season.

How do you feel about your team's final position?🥳😕😡#WeAreCalcio pic.twitter.com/dwqSrTzlup

Milan, Juventus, Napoli battle it out for CL Spots on final matchday

Inter Milan ran away with the league title this season as Antonio Conte's men were declared Serie A champions with four matchdays left. However, the battle for the Champions League qualification Serie A caught everyone's eye as the second, third, fourth, and fifth-ranked teams were separated by just 3 points ahead of the final matchday. With four teams eyeing three remaining Champions League slots, all eyes were stuck on Juventus, Napoli, Atalanta and AC Milan as they looked to secure Champions League football for the next season.

The Rossoneri had a fantastic start to the Serie A season and were also in contention to walk away with the title. However, a slip of form in Stefano Pioli's side saw Milan struggle at the start of the new year with other teams getting positive results and fighting for a top-four spot. Heading into the final matchday with 76 points to their name, AC Milan's future lay in their own hand as they looked to get back in the Champions League.

Stefano Pioli's men took on Atalanta and had to edge out a win or expect other results to go their way in order to get back into Europe's most prestigious competition for the first time since 2013-2014. The Rossoneri managed to put the game to bed with ease as Franck Kessie converted the penalities in each half to help AC Milan finish the season at the second spot and cement a Champions League berth for themselves next season.

Just like their Milan rivals, Antonio Conte's men also celebrated their title-winning campaign on a good note by recording a massive 5-1 win over Udinese in their last league match of the campaign.  Playing the match on home turf, Inter Milan had an award ceremony at San Siro at the end of the match which saw captain Samir Handanovic lifting the trophy in front of 1,000 invited guests inside the San Siro. Inter Milan celebrations saw the players' friends and family get a chance to share some moments on the ground as many fans gathered around the stadium to celebrate their team's first Serie A title win after 11 years.

After the on-field celebrations, Inter players gathered at one of the most iconic buildings in Milan where they continued the party by taking the trophy alongside them and celebrating their Scudetto win with the fans.

READ | Mbappe named Ligue 1 Player of the Season as Lille pip PSG to league title
First Published: 24th May, 2021 13:31 IST
SUBSCRIBE TO US