Alisson Becker interview: The Reds goalkeeper dedicated his incredible stoppage-time winner against West Brom to his father Jose, who died earlier this year. 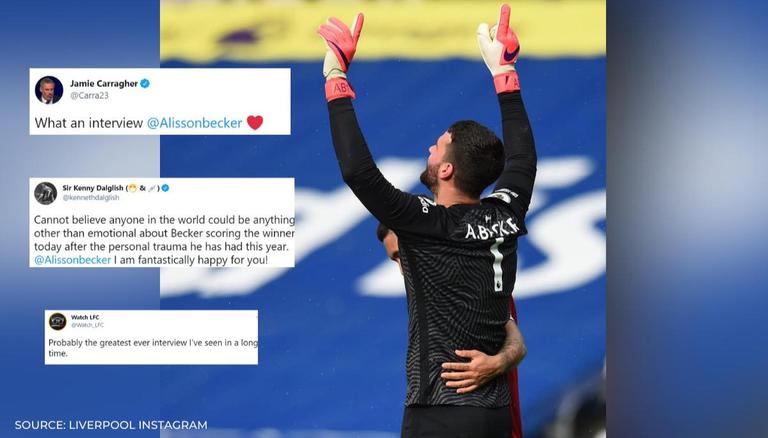 Liverpool goalkeeper Alisson Becker scored an incredible injury-time winner as Jurgen Klopp's side came from behind to claim all three points against West Brom at The Hawthorns on Sunday. It was pure drama and will go down as the most memorable moment of a rather forgettable season for Liverpool. It also brought them a step closer to qualify for next season's Champions League and the post-match Alisson Becker interview left fans rather very emotional.

Hal Robson-Kanu fired the hosts ahead after just 12 minutes before Mohamed Salah drew his side level just after the half-hour mark. The Reds then wasted a host of chances in the second half and looked set to suffer a major setback in their pursuit of Champions League football next season. However, in the final minute of stoppage time, Liverpool won a corner and Alisson, who marched forward from his own goal, rose to glance Trent Alexander-Arnold's delivery into the far corner of the net.

The 2-1 win for Liverpool put them just a point behind Chelsea in fourth and three behind third-placed Leicester City with two games remaining. However, Chelsea and Leicester will square off in the Premier League this week. Liverpool will now have to win their two remaining games against Burnley and Crystal Palace if they are to stand any chance of qualifying for the UCL for next season. The Liverpool top 4 chances look highly likely now.

Alisson's header against West Brom was the first time a goalkeeper scored a competitive goal for Liverpool in their entire history and speaking afterwards, the 28-year-old dedicated the goal to his late father. He said, "I am too emotional after everything that happened with me and my family but football is my life. I have played since I remember as a human being with my father. I hope he was here to see it. I am sure he is celebrating. This was for my family and for the boys. We fight a lot together and we want to get to the Champions League. We won it in 2019 and it was all because of qualification."

A fantastic interview with Alisson, who dedicates his sensational last-minute goal to his father who passed away earlier this year 🙌 pic.twitter.com/4w2HsbaO16

He added, "I hope my father is watching and celebrating somewhere. I am really happy. Thank you for the players as we fight a lot. I’ve been away from interviews [for] a long time. [It] was a difficult time because when I talk about it I get emotional on that but I just really want to thank all of you [the media], all the Premier League, all the players."

READ | With new protests outside, Man United loses 4-2 to Liverpool

Fans on social media were quick to react to Alisson's interview as well. The Alisson father death story is extremely tragic especially in these times.

Cannot believe anyone in the world could be anything other than emotional about Becker scoring the winner today after the personal trauma he has had this year. @Alissonbecker I am fantastically happy for you!

How did Alisson Becker's father die?

Alisson was in tears at the full-time whistle and during his interview but it's not hard to understand why. His father, Jose Becker, tragically passed away earlier this year in a swimming incident at a lake in Brazil. Alisson was unable to attend the funeral back in his native due to the COVID-19 travel restrictions.