Fans poured onto the streets of the capital of Buenos Aires as soon as the match ended, with people waving Argentina flags out of their cars while others jumped and sang in joy amid a sea of wearing the national team's jersey. 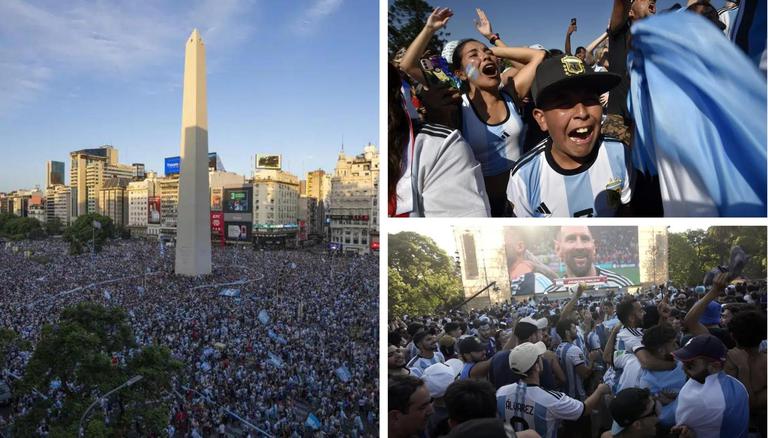 
The streets of Argentina turned into a party Tuesday as the national team beat Croatia by a comfortable 3-0 and earned this soccer-crazed South American country a spot in the World Cup final.

Fans poured onto the streets of the capital of Buenos Aires as soon as the match ended, with people waving Argentina flags out of their cars while others jumped and sang in joy amid a sea of wearing the national team's jersey.

Earlier, Buenos Aires had come to a standstill on what was a scorching summer afternoon as fans packed cafes, restaurants and public plazas, where giant screens followed the exploits of the Lionel Messi-led team.

"I'm in complete ecstasy,” said Emiliano Adam, 31, who works at an advertising agency and was celebrating in the streets of Buenos Aires while wearing the country's flag as a cape. “This is the first match that didn't make me suffer, the first time I could enjoy a match from beginning to end." Argentina will now play the last match of the World Cup against either France or Morocco, who are facing off Wednesday.

With that final match still days away, Tuesday turned into a day of joy as thousands of people descended on the capital's iconic Obelisk.

The agonizing start of the tournament for Argentina was followed by a string of victories that have brought some much-needed joy to a country stuck in an economic standstill with one of the world's highest inflation rates, closing in on almost 100% per year, and where close to four of every 10 people live in poverty.

“We're all super excited, it's been so long since we've lived a happiness like this. It's beautiful, I mean look at this,” said Laila Desmery, a 27-year-old actress, as she pointed to people dancing and celebrating on the street. "It's really unexplainable the joy that we're going to be living through in the next few days.” The sky-high hopes for the Argentina team only increased here after the quarter-final against the Netherlands, an agonizing match that ended in a penalty shootout and led to a collective feeling the team that had shocked the world by losing its opening match against Saudi Arabia had finally found its groove.

“This was the antithesis of the last match, we won easily, with ample advantage and without moments of so much tension and stress,” said Valentina González, 31, a social media manager.

Mariano Balestrasse said he was particularly proud of how the national team “has improved significantly every day and in every match you could see an improvement.” In that sense, the shocking loss against Saudi Arabia “helped consolidate the team,” the 28-year-old architect said.

“This team connected a lot with the people, you can tell they're very united and they transmit that,” said Abe Pérez, a 52-year-old civil servant.

In a traditional café in the Buenos Aires neighborhood of Palermo, those who had been nervously staring at the television screen exploded in jubilation when Messi scored a penalty kick, ending what had been an agonizing goalless 33 minutes.

“Messi, Messi, Messi,” the crowd started chanting as they moved their arms in a worshipping ovation.

It was only five minutes later, before the crowd had even had a chance to cool down that Julián Álvarez scored an impressive goal, taking the score to 2-0.

By the second half, the crowd was ecstatic and when Álvarez, with an assist from Messi, scored a third goal, the joy overflowed with people jumping on chairs, kissing and hugging.

“Holding Messi by the hand, we're going to go all the way,” the crowd chanted.

Tuesday's victory and reaching the World Cup final was even sweeter due to the initial difficulties that the team faced in the tournament, González said.

“It seems that it always has to be difficult to get there, but we get there and we win. It's as if there is no winning without suffering,” the 27-year-old said.

“Many people say that we like to suffer because if we don't suffer it's as if nothing is happening, and, well, this is a little like that," Desmery said. “As Argentines, we like to feel a lot and then the celebration is three, four times as large.”