Barcelona boss Ronald Koeman has come out and said that he would quit only if the players did not understand his messages and that he is happy there for now. 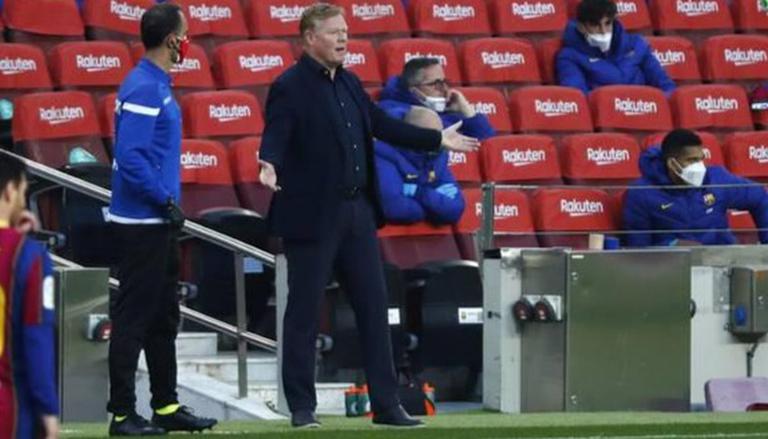 
Things seem to be heading for worse for Barcelona as they were held to a 1-1 draw against Granada in La Liga on Monday. The Blaugrana conceded within the first two minutes thanks to a well-taken goal from Domingos Duarte. After that, it was a constant barrage of attacks from Barcelona but they were unable to break down Granada's defence until the 90th minute when a header from Ronald Araujo found its way into the back of the net.

Barcelona has been mulling the decision to sack Ronald Koeman however, those rumours were later refuted by the club. Now, the Barcelona boss has come out and said that he would quit only if the players did not understand his messages. He said that as of now that is not the case and that every day he is on the pitch with his players and it is always a 'nice day'.

The only way I will quit Barca is when my messages don't arrive at the players anymore. That's when I will say: ‘Okay, I am done here’. But this is not the case. Every day that I am on the pitch with my players is a nice day” Barca manager Koeman told VI as quoted by Fabrizio Romano.

In a recent press conference ahead of their match against Cadiz the Dutch coach has asked for support from the fans as they are currently in a period of "reconstruction". He then added that the club is with him and they need to improve the team without much financial aid. He then said that the young talents they possess can become top players in a few years but asked for patience from the fans.

“Finishing high in the table would be a success on its own and in the Champions League we cannot expect miracles. The defeat against Bayern should be taken with perspective.The team should be supported, with words and with actions,” said Koeman before he got up and walked off without answering any further questions.

READ | Koeman lifts the lid on Pjanic and Umtiti's Barcelona future; heaps the praise on Coutinho

'Not the Barcelona of eight years ago' - Koeman

Barcelona and Koeman need to start working on their tactics and form a proper team if they are to compete for La Liga with the likes of Real Madrid and Atletico Madrid. After the match, Koeman said, "Today's Barca is not the Barca of eight years ago. We played Barca's way, but we don't have the speed on the break because (Philippe) Coutinho goes inside, (Yusuf) Demir doesn't go too deep and that's the way it is. With Ansu (Fati) or (Ousmane) Dembele it's different, you have more speed, but you have to look for alternatives."

"Before the game, you think about winning, especially at home, but our bad start made the game difficult for us. We didn't come in strong, it was our fault. The opponent, after scoring, wasted time from minute two, defended more, did not leave spaces and this is difficult. We improved during the game. We changed and we played with crosses from the wings. We put energy into scoring. We wanted more, but one point is better than nothing. We deserved the draw," Koeman was quoted by Goal.com.

READ | Ronald Koeman's future hangs in the balance as Barcelona board wants him sacked: Report