Barcelona striker Sergio Aguero was taken to hospital mid-match after he complaint of breathing difficulties during their match against Alaves at Camp Nou. 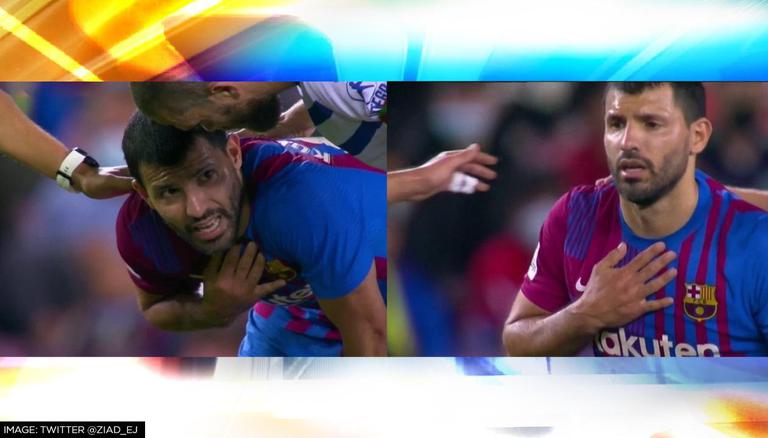 
Barcelona striker Sergio Aguero was taken to hospital mid-match after he complaint of breathing difficulties during their match against Alaves at Camp Nou. The incident occurred just minutes away from half-time break and Aguero taken to hospital for cardiac tests after receiving medical attention on the ground. Aguero was seen holding his chest before he left the field in an ambulance. The 33-year-old Argentine was replaced by Philippe Coutinho in the 42nd minute.

Barcelona turned to social media to inform that Aguero has been admitted to hospital for cardiac tests after suffering from chest pain. Aguero was seen struggling with the pain for most of the first half. "Sergio Agüero was struggling with chest pain for much of the first half and was replaced by Philippe Coutinho at half time and then taken to hospital for a cardiologic analysis," Barcelona said in a statement after the match.

Meanwhile, Barcelona suffered another blow in the match as their star defender Gerard Pique was taken off the field after he pulled the soleus muscle in his right calf. Barcelona has said that tests will be required to determine the full extent of Pique's injury. Pique was replaced by Clement Lenglet in the 70th minute.

As far as the match is concerned, Barcelona were held to a 1-1 draw by Alaves. Despite achieving an early lead over the visitors, Barcelona were held to a draw courtesy of an incredible equalizer by Luis Rioja, who breached the defence at Camp Nou to send one inside the nets. Earlier, Memphis Depay had scored a goal in the 49th minute to provide the home side an advantage in the game.