Belgium's Timothy Castagne suffered a narrow escape from a career-ending injury after his collision with Russia's Daler Kuzyaev in their opening match. 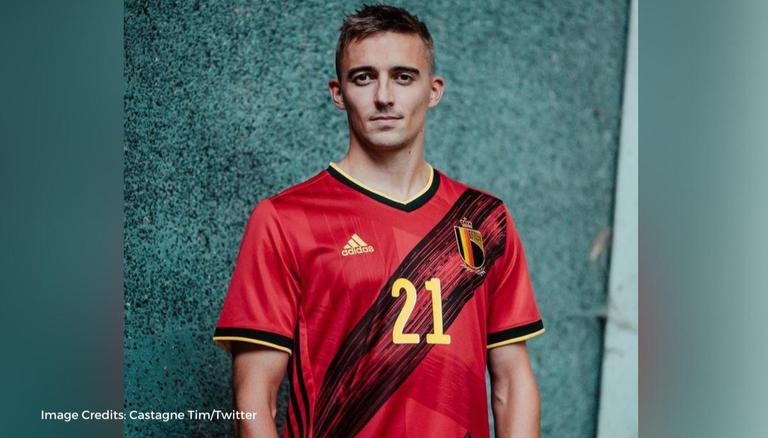 
Belgium started their Euro 2020 campaign with an impressive 2-0 win over Russia. Romelu Lukaku scored twice in the game which eased the victory for Roberto Martinez and his men. But, the Belgian Red Devils suffered a setback in the game, as their right-back Timothy Castagne collided with Russia's Daler Kuzyaev which left the Belgian player injured. The Leicester player was subbed off from the game and further X-ray reports revealed that the Belgian was just 3 inches away from a career-ending injury.

Doctors fear that Timothy Castagne has broken his eye socket. He was subbed off after a collision. pic.twitter.com/Gr4NdZjH8H

The Belgian collided heads with the Russian which led to a severe injury to his eye. Initially, it was believed that Timothy Castagne had a double fracture but his X-Ray scans showed that there were 3-4 breaks to his right socket. Roberto Martinez in his pre-game interview confirmed, that the Belgian will be out for the tournament as it will take at least 6 weeks for the injury to heal. Timothy Castagne's injury is definitely going to be a huge blow to the Belgium side, as he was an important part of the team and was also picked ahead of Thomas Meunier in the Euro 2020 game against Russia.

Timothy Castagne injury: When will the Belgian be back?

According to reports, Timothy Castagne's surgery lasted for 6 hours in Saint Petersburg. The medical team was sceptical about conducting the operation due to the swelling around his eye but went ahead anyway. Roberto Martinez confirmed that the surgery was successful. The injury will take anywhere between 6-8 weeks to heal, but Castagne will be hoping to be back for Leicester in their opening fixture against the Wolves.

Castagne has been phenomenal for Leicester this year, the right-back featured in 27 premier league games and was one of the regular players in Brendan Rogers lineup. His impressive performance earned him a place in the Belgian squad and he looked impressive right until the 25th minute where he got injured which shortened his first competitive start for Belgium in an international competition

Belgium qualify for the Round of 16

Belgium's victory in their game against Denmark sealed their Round of 16 spot. After scoring just 2 minutes into the game, the Danes continued putting pressure on the Belgian team and came close to scoring many times in the first half. But, things changed in the second half as De Bruyne came in and provided instant impact by scoring a goal and producing an assist that helped the Belgians to a 2-1 win over Denmark.

WE RECOMMEND
Kevin De Bruyne joins up with Belgium squad after facial surgery ahead of Euro 2020
Belgium will pay tribute to Christian Eriksen by doing THIS during their game vs Denmark
Is De Bruyne playing tonight vs Denmark? De Bruyne injury update
Supporters say farewell as Gbagbo leaves Belgium
Belgium vs Russia prediction, team news and Euro 2020 live stream details