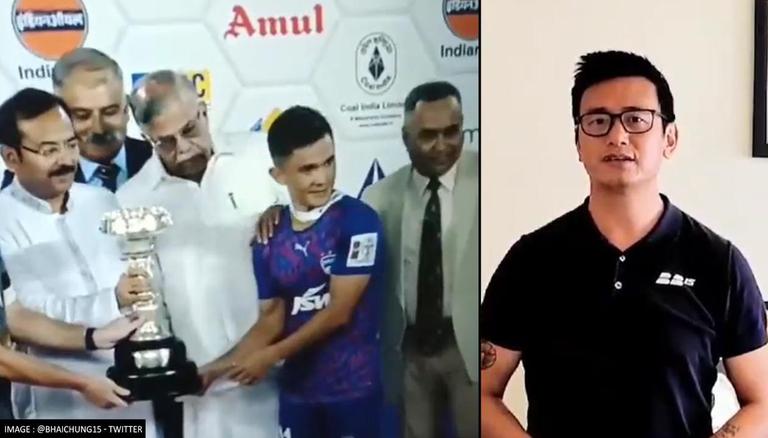 
Former Indian football star Bhaichung Bhutia was left speechless after he watched current captain Sunil Chhetri being pushed by West Bengal Governor La. Ganesan Iyer while posing for a picture. Chhetri was seen posing alongside the Governor while lifting the Durand Cup trophy he won by leading his Bengaluru FC side against Mumbai City FC. The Bengaluru team won 2-1, with a goal each from Sivasakthi and Alan Costa.

Meanwhile, Aakash Chopra and Robin Uthappa also took to social media to criticize Iyer for his 'disgraceful' behaviour towards one of the country's biggest shining stars.

🤦🏾‍♂️🤦🏾‍♂️thats just all sorts of wrong!! Sorry @chetrisunil11 you deserve so much better than this!!

After leading his Bengaluru FC side to their maiden Durand Cup title, Sunil Chhetri took to social media and explained how delighted he was to win the trophy that eluded him for over two decades. "Two decades is a bit of a wait, but if it meant doing it in the blue of Bengaluru, then it was worth every season of trying," said Chhetri. "Durand Cup Champions - would have been a shame if an Army kid playing football professionally never had the chance to say this. Come on, BFC!"

Meanwhile, in his immediate post-match interview, Chhetri said, "That was a dream at the start of the tournament. Before the tournament, you can of course not think about the result. But now I can happily say we are victorious. It is amazing for so many reasons! It is a new team, a new coach. We worked really hard, a lot of youngsters coming in. The way we played, me winning the cup for the first time, and BFC winning for the first time just make me immensely happy."

READ | Sunil Chhetri delighted with India hosting U-17 Women WC: 'We saw what it did with boys'

The Durand Cup is the latest addition to Chhetri's trophy cabinet, having won the I-League, Indian Super League and Super Cup titles previously in his career.