Struggling AC Milan will lock horns with relegation battlers Brescia in a rare Friday night game for Stefano Pioli’s men. AC Milan are currently eighth in the Serie A table. Hosts Brescia, on the other hand, are 19th and winless in their last five outings. Here is our BSC vs MIL Dream11 take. The BSC vs MIL game will kickoff on Friday night, January 24 (1:15 am IST).

AC Milan appear to be in a perennial state of rebuilding. In mid-December last year, Atlanta put five past AC Milan as Stefano Pioli's men failed to get their bearings for the trip to the Stadio Atleti Azzurri d'Italia. Since then, however, AC Milan have gone on a winning run. A 0-0 draw at home to Sampdoria was followed by wins over Cagliari, SPAL and Udinese. As such, AC Milan will be in high spirits as they make the trip to the Stadio Mario Rigamonti.

Brescia are coming off a hard-fought draw against sixth-placed Cagliari. Striker Mario Balotelli's red card after just seven minutes of action took some of the sheen off that 2-2 draw. “It was an unfortunate incident, as we all thought the initial yellow card was harsh. He jumped for the ball and didn’t see the defender coming up behind him,” Brescia coach Eugenio Corini offered an explanation for Balotelli's second yellow. The ill-tempered Italian will miss the game against AC Milan and, in turn, a chance to get one over his former side. For AC Milan, Mateo Musacchio and Hakan Calhanoglu have recovered from injuries while Stefano Pioli will be tempted to keep faith with Simon Kjaer in defence. 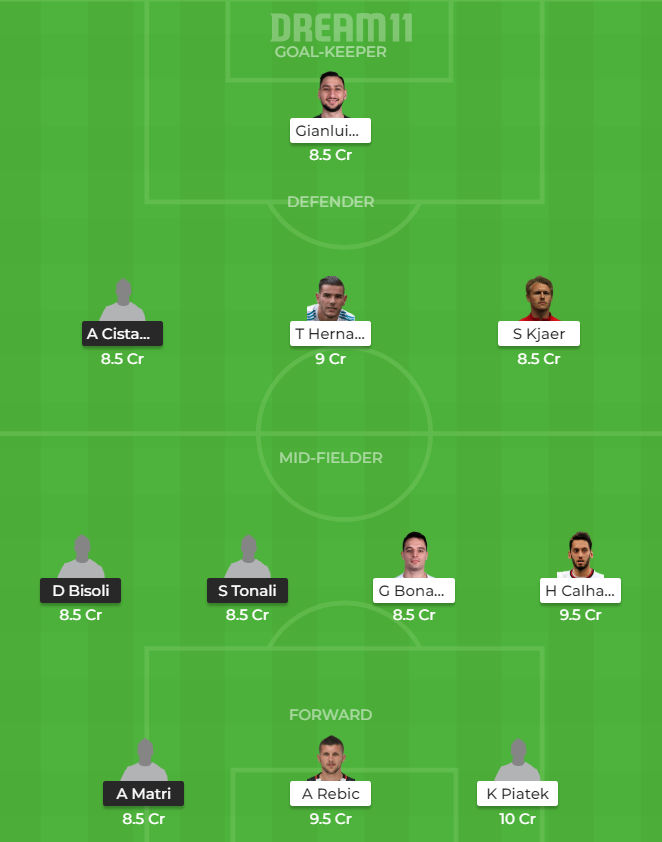 Brescia are fresh off a fighting draw against Cagliari. Eugenio Corini's men were unlucky not to emerge with all the three points against Cagliari. However, AC Milan have now strung together a series of three consecutive victories. With Gianluigi Donnarumma in goal, it is difficult to see Brescia get on the scoresheet. Our BSC vs MIL Dream11 prediction for this game, therefore, is a comfortable win for AC Milan.