Casemiro who was given chance to say final goodbye couldn't hold his tears as he delivered his farewell speech ahead of his move to Manchester United. 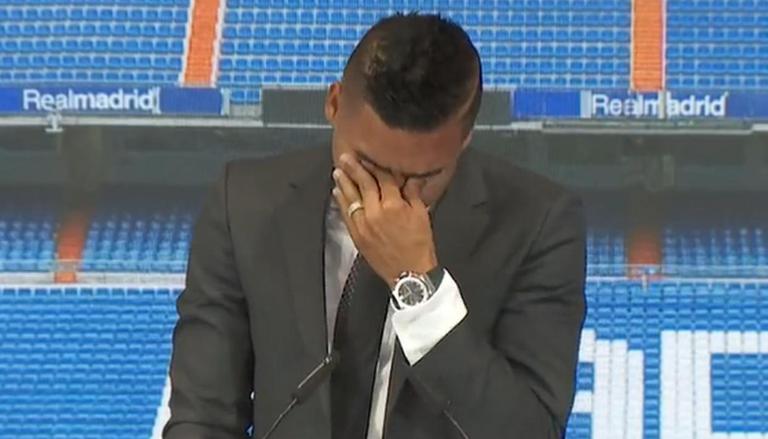 
Casemiro on Monday said an emotional goodbye to Real Madrid after completing his move to Premier League giants Manchester United. The Brazilian moved to the Bernabeu in 2013 and after a loan spell with Porto went on to become a mainstay of the team helping Los Blancos to five Champions League titles. The 30-year-old who was given chance to say final goodbye couldn't hold his tears as he delivered his farewell speech.

Casemiro breaks down in tears during farewell speech

The Brazilian said goodbye at a press conference which took place at Real Madrid’s Valdebebas training complex. President Florentino Perez, manager Ancelotti and many of his teammates were in attendance during the event. Casemiro shared an emotional embrace with his manager after arriving at the venue.

Even before starting his final speech, Casemiro broke down before wiping away tears with a tissue. Casemiro in his speech said, "Good morning everyone. When me and my wife arrived here no one knew us. It was a new country and here we built our life and our family. I remember when I first received the Real Madrid call, I was so excited. When I left Brazil I knew I would have played at Castilla, I was very excited because I knew I would have learnt the values of this club."

READ | 'I am joining the biggest club in England': Casemiro excited to play with Ronaldo again

He added ‘I won a lot of titles but the biggest title is when I came here to train every day. I want to thank everyone, my mother, my wife, this club, all the players and teammates. Luka Modric and Toni Kroos… I can’t forget them! We won a lot together. I’m sure one day I’ll come back. I want to give back all the love Real Madrid gave me. I am excited to develop at a big club like Manchester United. President, thank you a lot. This club will have a great future with you. Hala Madrid!." Manager Carlo Ancelotti could be seen in tears in the audience as Casemiro bid goodbye.

Manchester United completed Casemiro transfer from Real Madrid in a deal worth £70m. The deal is worth four-year with United paying €60m including €10m add-ons with an option to extend the contract until 2027. The Brazilian was unveiled in front of Old Trafford fans before the Manchester United vs Liverpool match. The Manchester United move will see Casemiro united with Brazilian teammate Fred and former Real Madrid teammates Raphael Varane and Cristiano Ronaldo. With United needing a defensive midfielder Casemiro's experience will come in handy during the entire season. The midfielder could make his debut against Southampton next week. Casemiro becomes United's fourth transfer signing following the arrivals of Christian Eriksen, Tyrell Malacia and Lisandro Martinez.