Cavani goal vs Fulham: 'El Matador' scored the opener for United with a stunning chip from 50 yards out as the Red Devils drew 1-1 with Fulham on Tuesday. 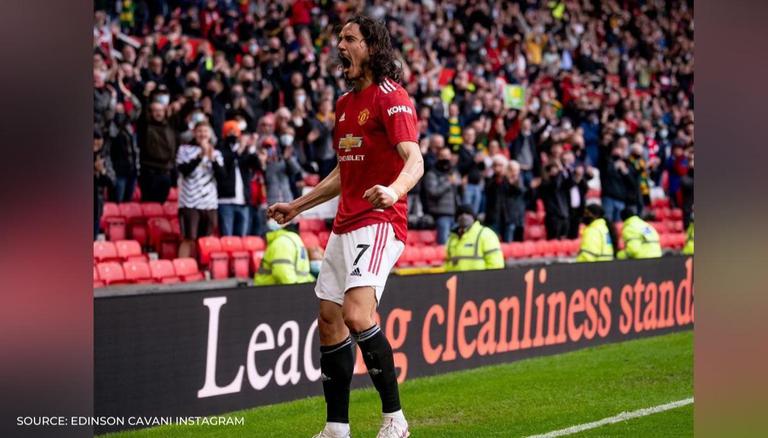 Edinson Cavani treated the Manchester United fans at Old Trafford to a stunning goal on Tuesday as he found the back of the net from over 50 yards out in his team's 1-1 draw against relegated Fulham. The Red Devils were not at their best on the day but that didn’t deter Cavani from scoring a sensational goal to put United in the lead in just the 15th minute of the match. However, there was some controversy around Cavani's wondergoal as Fulham felt they were hard done by VAR.

Edinson Cavani's stunning long-range goal looked to have given Man United all three points as 10,000 fans returned to Old Trafford for the first time in 14 months. However, Joe Bryan's late header earned Fulham a share of the spoils. Despite a rather underwhelming start to the game, United took the lead in the 15th minute thanks to Cavani's goal.

🏹 Edinson Cavani welcomes fans back to Old Trafford in style 😉

Cavani's first game in front of the Old Trafford crowd and he scored an unreal goal from 40 yards. #MUNFUL
🎥 (@sparknzsport) pic.twitter.com/IpUgtZAVsA

David de Gea's clearance from the United goal was flicked on towards Cavani by Bruno Fernandes. It appeared that Cavani was offside when De Gea hit the ball forward. However, according to VAR, the Uruguayan was actually onside as Bruno Fernandes had got a touch on it as it skidded past him in midfield on the way to the striker.

Cavani producing the goal of the season in his first game in front of the fans. Phenomenal player

Me watching that Cavani goal pic.twitter.com/Suvm41KJCH

I’m not a United fan but to watch Cavani - who I love - score this utterly brilliant goal & then to see the fans going crazy in a stadium again to celebrate it is a beautiful thing. 👏👏👏 https://t.co/SuMThjxgIW

'El Matador' then noticed that the Fulham keeper Alphonse Areola was off his line and executed a brilliant chip from over 50 yards out to send the United fans at Old Trafford in delirium. However, the hosts wasted a number of chances and were punished in the 76th minute as Joe Bryan got on the end of Bobby De Cordova-Reid’s cross and headed it past goalkeeper De Gea at the far post.

The result left United second in the Premier League standings on 71 points from 37 games ahead of their final league match of the season against Wolverhampton Wanderers on Saturday, having stretched their winless run to three games. Fulham, who are at home to Newcastle United in their final match, stayed 18th on 28 points in the Premier League standings as they picked up only their second point in the last nine league games.

Since joining United from PSG on a free transfer last summer, the Edinson Cavani stats are nothing short of remarkable, which include 16 goals for United and racked up five assists as well. He will be looking to win his first piece of silverware with the club as well when United face Villarreal in the Europa League final later this month. Earlier this month, the Edinson Cavani contract extension with Manchester United was confirmed that will keep him at the club until 2022 with the option to extend his stay at Old Trafford for another season.