Chelsea Champions League history: Here's a look at how the English giants have fared in the prestigious European competition over the years. 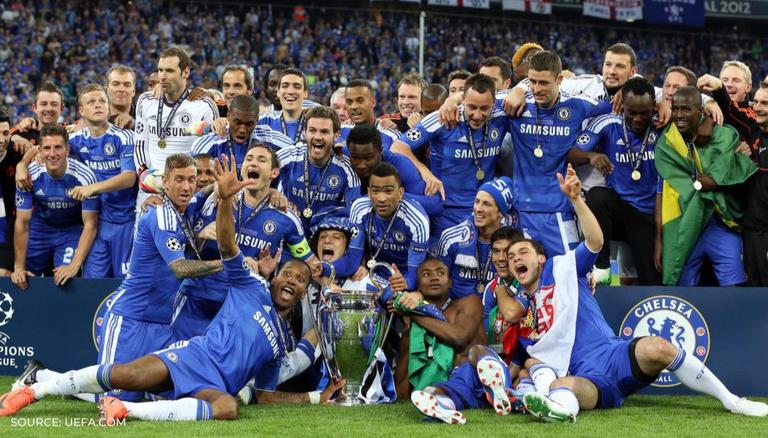 Chelsea will lock horns with Real Madrid at Stamford Bridge on Wednesday for the 2nd leg of their Champions League semi-final clash. With the first leg having ended in a 1-1 draw, the Blues are still favourites to advance to the final due to their precious away goal scored by Christian Pulisic. As Chelsea aim to make it to their third Champions League final appearance, here's a look at how they've fared in the major European competition over the years.

While Chelsea were a reasonably consistent club for most of their history, people nowadays usually associate them with the football juggernaut they've become since the turn of the century. In total, the London outfit has won six English titles, eight FA Cups, five League Cups, two Europa League titles and one Champions League title. Their only UCL feat came in 2012 when they beat Bayern Munich in the final.

The Blues made their first appearance in the Champions League in 1999 and made it to the quarter-finals before being knocked out by Barcelona. They've been a regular in the competition ever since. Chelsea reached the semi-finals in 03/04 and 04/05 but were dumped out by Monaco and Liverpool respectively. The following season, Chelsea were eliminated by Barcelona in the round of 16.

In 2007, Chelsea made it to the semi-finals but suffered defeat against Liverpool on penalties. The Blues then reached their first UCL final in 2008 but lost to eventual champions Manchester United. The following year, they lost out to Barcelona in the semi-finals.

Chelsea then exited the competition in the last 16 following two defeats against Inter in 2010. The next season, they lost to Man United in the quarter-finals. However, in 2012, they made history by becoming the first team from London to win the Champions League title when they beat Bayern Munich in their own backyard in the final.

🔵 #OnThisDay in 2012, Chelsea won the #UCL trophy for the first time after a dramatic #UCLfinal against Bayern 🏆#OTD | @ChelseaFC https://t.co/GEfxLIkCQ7 pic.twitter.com/yqvR421L5n

CHELSEA ARE THE CHAMPIONS OF EUROPE!

The following season, Chelsea failed to make it past the group stages. During the 2013/14 season, they made it to the semis but were knocked out by Atletico Madrid. Chelsea were then eliminated from the competition in the quarter-finals by PSG in two consecutive seasons.

In 2018, Chelsea were again dumped out of the tournament by Barcelona in the last 16. They then suffered elimination in 2020 against Bayern Munich at the same stage. Chelsea will now be hoping to make it to their third UCL final when they lock horns with Real Madrid on Wednesday.

In India, the game will broadcast live on Sony Ten 2 SD & HD, Sony Ten 3 SD & HD. The Chelsea vs Real Madrid live stream will be available on SonyLIV. Live scores and updates can be accessed on the Twitter handles of both teams.