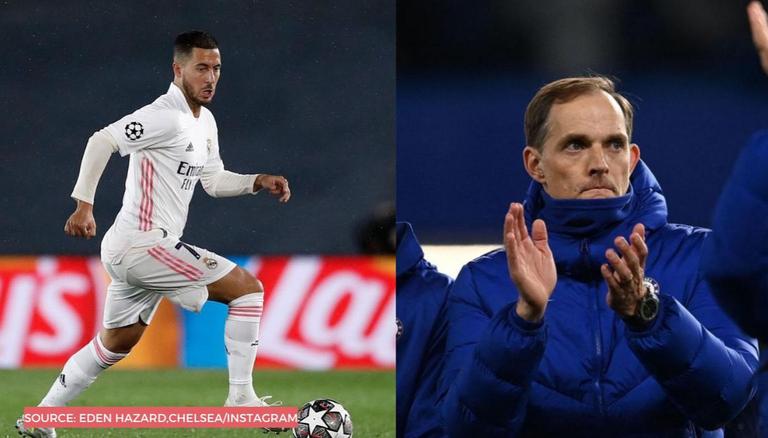 Real Madrid winger Eden Hazard did not have the best of starts to his footballing career in Spain with the Blancos star rumoured to leave the Liga giants in the upcoming summer transfer window. The 30-year-old Belgium attacker has been poised with a move back to Stamford Bridge with Chelsea transfer news revealing the London outfit's interest in acquiring the winger's services for next season.

Eden Hazard spent seven successful years at Chelsea, winning two Premier League titles alongside two Europa League trophies, one FA Cup and a League Cup since joining the London outfit in 2012. Later, the Belgian winger got his dream move to Real Madrid with Los Blancos spending over £83.53m and bringing the 30-year-old attacker to the Bernabeu in the summer of 2019.

However, Eden Hazard has failed to replicate his Chelsea form for Los Blancos and has not been able to play to his best potential across the last two seasons he has spent with the Liga giants. The Belgian winger saw his stint in Spain plagued with injuries resulting in him featuring in just 43 games across all competitions during the last two years. Real Madrid’s management has reportedly grown unhappy with Hazard and is rumoured to have listed the Belgium attacker with the aim of selling him in the upcoming summer transfer window.

Real Madrid transfer news revealed that the LaLiga giants are expected to offload a number of players including the likes of Gareth Bale, Isco and Hazard amongst others in an attempt to generate revenue which will reportedly be used to fund moves for Erling Haaland or Kylian Mbappe in the summer. Real Madrid have been rumoured to place a €50m price tag on Hazard with the attacker getting linked to a return to Chelsea in the summer transfer window.

Eden Hazard transfer news: Belgian attacker on the verge of a London return?

Chelsea boss Thomas Tuchel was full of praise for Eden Hazard during his pre-match conference before their Champions League semi-final earlier. The German head coach called Hazard a "top quality player" while also valuing his importance and calling him a "key figure for many years" at Chelsea and in the Premier League. He spoke about his impact at Chelsea and revealed how he has "the biggest respect" for the forward.

The Belgian winger added fuel to fire after causing a controversy back during his return to Stamford Bridge earlier last month as Real Madrid locked horns against Chelsea in the semifinals of the Champions League. Following the loss, the Real Madrid attacker was seen joking and laughing with a few Chelsea players rather than being dejected by the Champions League exit.

With the transfer window upon us and Chelsea looking to boost their attacking options following the potential departures of Tammy Abraham and Olivier Giroud, it would be interesting to see if the former Chelsea man makes a return to Stamford Bridge in the upcoming summer transfer window.