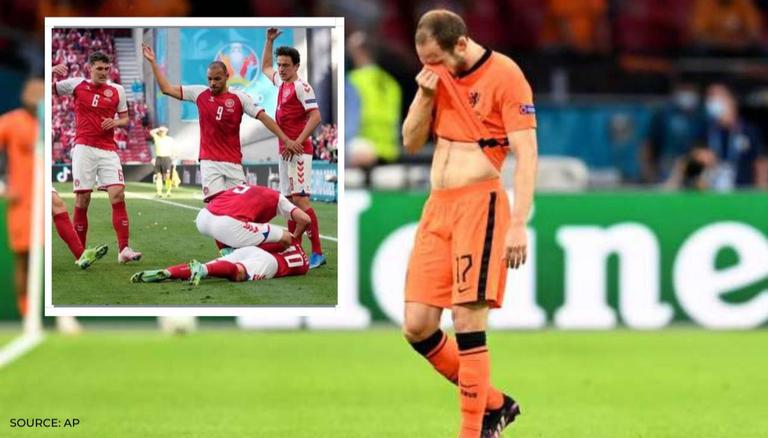 Dutch defender Daley Blind was reduced to tears on Sunday as he made his way off the pitch just after the hour mark in his nation's victory over Ukraine in their opening game of Euro 2020. Playing just over 24 hours after Christian Eriksen went into cardiac arrest 40 minutes into Denmark's clash with Finland, Blind was visibly emotional, given his ties with Eriksen. Eriksen was later brought to the hospital and is now in a stable condition, even video-calling his teammates, but the events brought back painful memories for Blind, who has suffered heart problems himself as a professional footballer. Here is more on the Christian Eriksen condition and the Daley Blind heart attack -

In late 2019, Blind was diagnosed with heart muscle inflammation after feeling dizzy in a Champions League clash against Valencia. Eight months later, the defender collapsed in a pre-season friendly against German outfit Hertha Berlin. As a result, the Ajax star was forced to have an implantable cardioverter-defibrillator (ICD) fitted before he was deemed in an appropriate condition to return to action. The ICD's purpose is to monitor any irregular heartbeat patterns, recognising any signs of a potential cardiac arrest and therefore preventing a heart attack.

Erik ten Hag: “Daley Blind’s ICD (implantable cardioverter defibrillator) went off. He got subbed off straight away and he is feeling okay now, he is feeling fine. We will do research about this now.” pic.twitter.com/RVDjCZDoKI

After the incident against the Bundesliga side, a statement from Ajax read: "Daley Blind collapsed and was taken off during the Ajax-Hertha match. The central defender feels good under the circumstances and was at Sportpark De Toekomst on Wednesday morning. He will be examined further and await the results of these tests before resuming training." Ajax boss Erik Ten-Haag revealed after the game that Blind's ICD had gone off after detecting irregular heartbeats.

READ | Eriksen sends 'his greetings' to teammates after collapse

Blind and Eriksen spent three years together from 2010 to 2013 and have remained friends ever since and the Dutch centre-back was visibly emotional following Eriksen's health scare.

Daley Blind, who is ex team-mates with Christian Eriksen and has had heart problems, was very emotional when he came off:

"It made me sleep badly and also really thought about not playing. It was a big mental hurdle to overcome, but I'm proud that I did."

Speaking after his country's thrilling 3-2 win over Ukraine, Blind explained his emotional display as he was substituted and revealed that he considered not playing on Sunday, “What happened last night has much impact on me. Not only because Christian is a very close friend of mine, but also because of what happened to me. I considered not to play tonight, I had to take a very big mental step and I'm proud of it." he said.

On Sunday, Danish team doctor Morten Boesen revealed that the Inter Milan midfielder had suffered a cardiac arrest during the game against Finland and “was gone” before being quickly resuscitated on the pitch after one defibrillation. However, they still do not know what caused the cardiac arrest and he will continue to remain in the hospital for further examination. Reports claim that the 29-year-old Eriksen might not be able to play professional football again.