Football megastar Cristiano Ronaldo now has the maximum international goals. He netted his 112th goal during Portugal's friendly game against Qatar on Saturday 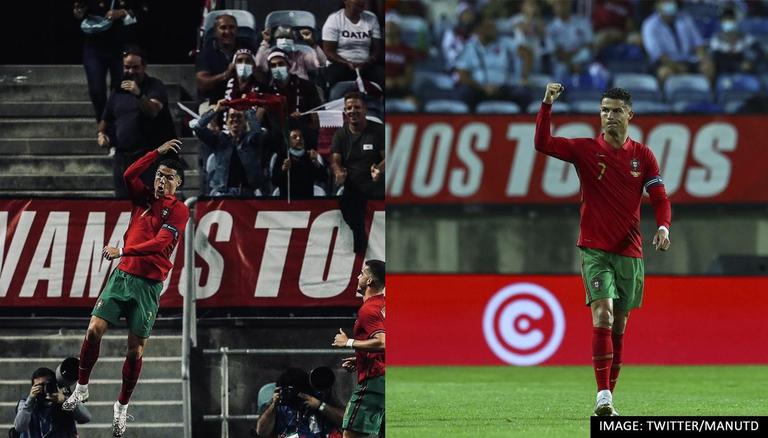 
The year 2021 has been phenomenal for Cristiano Ronaldo on the football field be it at the international or the club level. He had led Portugal from the front with two late goals against the Republic of Ireland during their World Cup qualifiers fixture last month as his team registered a 2-1 victory. In the process, Ronaldo also became the men's all-time international scorer.

Later that month, 'CR7' also surpassed Zlatan Ibrahimovic's record after netting a crucial goal for Manchester United against  West Ham during their Premier League clash and thus, Cristiano scored in 66 stadiums since the 2003-04 season which is more than any player in the history of the game. Lately, the football megastar has excelled in shattering yet another record.

Cristiano Ronaldo had donned the Portuguese jersey when the former European champions took on Qatar in a friendly game at the Algarve Stadium on Saturday where the football icon succeeded in finding the back of the net once i.e. during the 37th minute. By the virtue of this fantastic goal, the modern-day football great ended up netting his record 112th international goal.

Cristiano Ronaldo had already surpassed the milestone of 109 goals held by the Iranian striker when he had scored a match-winning brace against Ireland during Portugal's Qatar World Cup 2022 qualifiers match last month.

After 'CR7' achieved a new feat, his current club Manchester United as well as the Portuguese national football team took to their respective social media platforms and gave special mention to their icon.

A goal made in Manchester 😍🔥@DalotDiogo sets up @Cristiano for Portugal's first of the night 🇵🇹#MUFC pic.twitter.com/3MqfY7SgK0

Even Cristiano Ronaldo could not hide his excitement and he expressed happiness by taking to his official Twitter handle.

"The same pride as always when representing my country and branding with our colors. One more test, one more test, we follow together in the ambition, in the dream, and in the immovable path that we have set: to be present in the historic World Cup in Qatar in 2022!", Ronaldo wrote.