While Benzema registered the opening goal for Madrid on Sunday, Federico Valverde’s strike handed Madrid a 2-0 lead in the 35th minute. 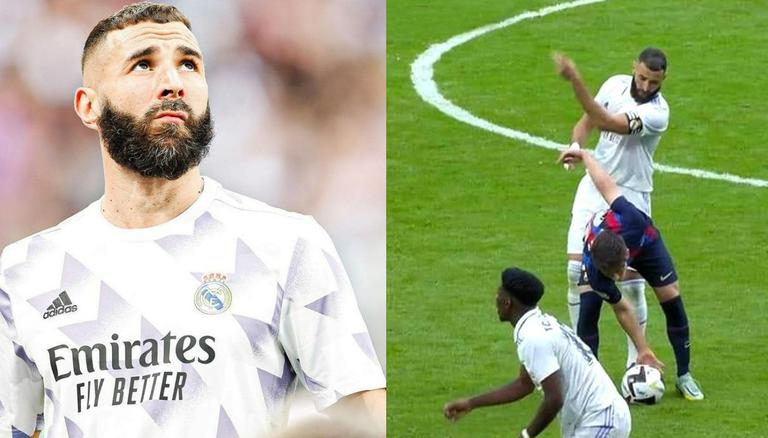 
Real Madrid registered their sixth win in the last seven El Clasico games against arch-rivals Barcelona by picking up a sensational 3-1 victory at the Santiago Bernabeu. Ballon d’Or 2022 nominee Karim Benzema scored the opening goal of the night at 12 minutes and was later involved in a heated exchange against Barca wonderboy Gavi. In the 80th minute of the game, as Madrid led the match by 2-0, Gavi attempted a tackle on Madrid’s Aurelien Tchouameni and ended up fetching a furious reaction from the Madrid talisman.

As Tchouameni tripped due to the tackle, it looked like Benzema was close to slapping the youngster. The video clip of Benzema swinging his arm and almost hitting Gavi is currently going viral on social media and drawing interesting reactions from users. Here’s a look at the viral video and the reactions it has received.

Gavi was ready to be angry but got scared when he saw it was Benzema 😭😭
https://t.co/EDx4BKEqMr

SUDDENLY GAVI BECAME SO HUMBLE WHEN BENZEMA CONFRONTED HIM 😭😭😭😭😭😭😭😭😭😭

Benzema is one of the calmest players you'll ever see, even he gets pissed off Gavi https://t.co/CuT1KOJUU3

Benzema, Valverde and Rodrygo star for Real Madrid in LaLiga

While Benzema registered the opening goal for Madrid on Sunday, Federico Valverde’s strike handed Madrid a 2-0 lead in the 35th minute. Following the incident involving Gavi, Tchouameni, and Benzema, Barcelona opened their score sheet with an 83-minute goal by Ferran Torres. The match ended 3-1 in Madrid’s favor after Rodrygo scored a penalty goal in injury time.

What has been said about the Real Madrid vs Barcelona, El Clasico match?

As per Associated Press, after the match, Barcelona manager Xavi Hernandez revealed his feelings about the loss. “We had our chances, but we are going through a bad moment and nothing goes our way. We need to change this dynamic as soon as possible,” Xavi said. Barcelona’s El Clasico loss against Madrid comes after a 1-1 draw against Inter Milan damaged their chances of reaching the knockout stage of the UEFA Champions League 2022-23 season.

Meanwhile, Madrid manager Carlo Ancelotti also shared his feelings and said, “I thought about what happened last season, when I tried something different. For this match, I didn’t try to come up with anything, I left the players in their positions and Modric played a spectacular match in midfield”. It is pertinent to mention that Barcelona won 4-0 against Madrid in their last game at the Santiago Bernabeu.