Euro 2020: Climate Activist Crashlands Parachute In France Vs Germany Game With A Message 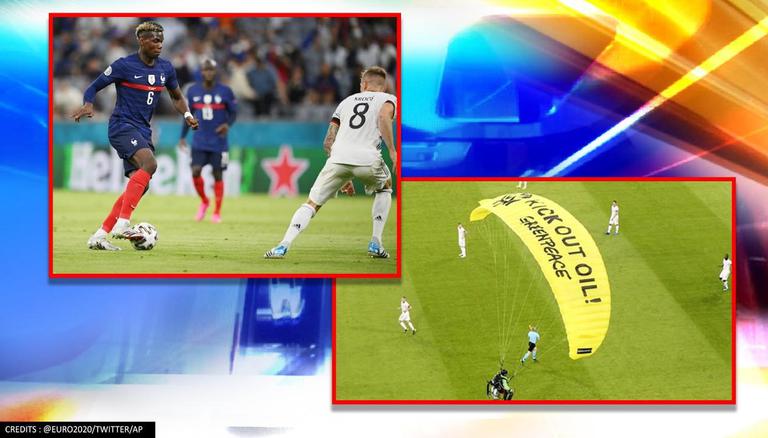 
World champions France started their UEFA Euro 2020 campaign in style with a 1-0 win over a resurgent Germany during their Group F clash at Allianz Arena in Munich on Tuesday. However, more than the World Cup holders' victory, it was the presence of a parachuting protestor that grabbed headlines as he ended up injuring several spectators at the Allianz Arena.

Several spectators were treated in the hospital for injuries caused by a protestor who parachuted into the stadium before France played Germany at the European Championship, UEFA said Tuesday. Debris fell on the field and the main grandstand, narrowly missing France coach Didier Deschamps, when the parachutist struck wires for an overhead camera attached to the stadium roof.

The incident happened just before the start of the UEFA Euro 2020 match between France and Germany. Meanwhile, the current coach of the world champions, Deschamps was shown ducking into the team dugout to avoid falling debris.

READ | From Serie B to Euro 2020, Italy players shaped by Zeman

The governing body of European soccer called it a “reckless and dangerous” act and said, “law authorities will take the necessary action.”

“This inconsiderate act... caused injuries to several people attending the game who are now in hospital,” UEFA said.

“We as the German soccer federation condemn it of course because it wasn’t just him, but others that he endangered and injured. It’s unacceptable from our point of view," German team spokesman Jens Grittner said. "And the incident is being checked by the police, the authorities here in Munich and at UEFA. But of course, we also condemn what happened there. It could probably have turned out much worse.”

Who was the protestor & what was the motive behind this protest?

The protestor's parachute had the slogan “KICK OUT OIL!" and 'Greenpeace' written on it. He glided into the stadium and seemed to lose control after connecting with the wires. He veered away from the playing area toward the main grandstand and barely cleared the heads of spectators.

The parachutist managed to land on the field and German players Antonio Rüdiger and Robin Gosens were the first to approach him. He was led away by security stewards and given medical attention on the side of the field.

UEFA and one of its top-tier tournament sponsors, Russian state energy firm Gazprom, have previously been targeted by Greenpeace protests.

Can't believe I just caught this on video. Parachuted into the stadium, got caught in the spider cam and nearly crashed into the crowd. Hope he's ok! #GERFRA #EURO2020 pic.twitter.com/PJ49WYdFM9