The Italy national team carried on their smashing form as they set another historic feat in their 5-0 win over Lithuania in the World Cup European qualifiers. 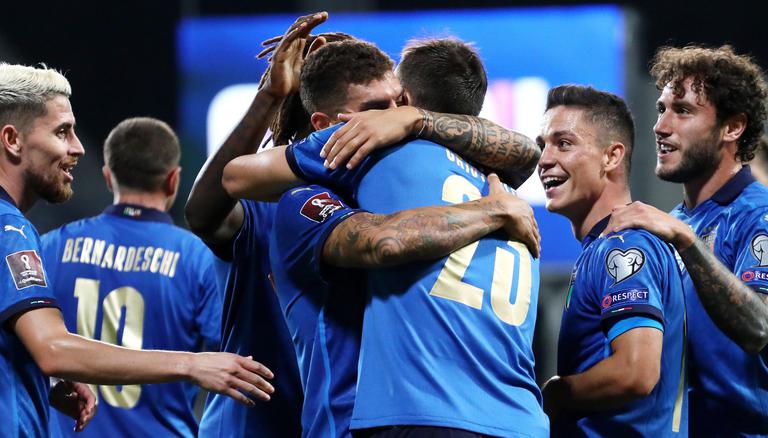 
The Italian national team carried on their smashing form as they set another historic feat in their 5-0 win over Lithuania in the World Cup European qualifiers on Thursday at the Mapei Stadium in Reggio Emilia, Italy. The Azzuri scored four goals in the opening 30 minutes of a match for the first time in their history. They have never managed to score as many in the first half of a match before. The victory also means they stretch their unbeaten run to 37 matches.

It took just 11 minutes for Italy to open the scoring when Moise Kean pounced on a defensive error to slot in at the near post. In the 14th minute, a Giacomo Raspadori shot from outside the box was deflected in by Lithuania's Edgaras Utkus to put the Azzuri 2 goals up. Raspadori then found his goal, this time credited to him as he was on hand to finish from close range after a goalmouth scramble. In the 29th minute, Federico Bernardeschi gave a lovely ball over the defense to Kean, who was running in behind, and the new Juventus striker finished with a superb half volley over the keeper. Di Lorenzo attempted to play a cross from outside the box in the 54th minute, but the ball fooled everyone and nestled into the back of the net.

The Azzurri have not lost a single game since September 2018 to stretch their unbeaten streak to 35 games. The last time they lost a game was a 1-0 defeat to Portugal in their Nations League match against them. Italy set the record after breaking the 35-match unbeaten, which they previously shared with Brazil and Spain. Brazil's record of 35 was set between 1993 and 1996, while Spain, from their unbeaten run, equalled that mark in 2009, which started from 2007. The unbeaten run has not been a fruitless one as they have managed to win the Euro 2020 along the way to set this historic run.

But Italy will want to continue their streak and hope to take it to the Qatar World Cup in November 2022. It is also fair to note that Algeria are currently on an unbeaten run of 28 games and will also be looking to try and get to historic figures soon. Italy will have a much tougher match during next month's international break when they face Spain in the Nations League semi-final on October 7.