In a video posted on Twitter, Lionel Messi can be seen showcasing his world-class free-kick abilities during a shooting drill at Argentina's training camp 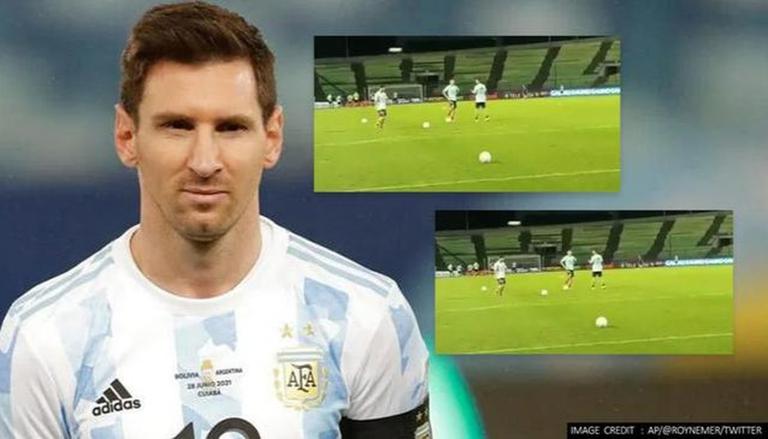 The six-time Ballon d’Or winner has been thriving from the dead-ball situation and has executed many finishes from free-kicks during his 21 years with Barcelona, and in the Argentina training camp, the 34-year-old was in the best of forms, firing back-to-back free-kicks. The Argentine football star fired two goals into the net, but his third attempt was unsuccessful as the powerful hit ended up hitting the crossbar. Watch the video below:

Argentina to face Brazil in their next FIFA World Cup Qualifier

In the ongoing FIFA World Cup Qualifiers, Argentina is presently placed second on the points table with 15 points. They have won four of their seven matches played. Three of their matches have ended in a draw. For their next match, Argentina will lock horns with Brazil on 6 September, with the aim of inching closer to the table-toppers. Winning all seven of the matches they played, Brazil is currently placed top of the points table with 21 points.

READ | Ansu Fati’s father gets emotional as son takes over Lionel Messi’s No. 10 at Barcelona

In their last match at the FIFA World Cup Qualifiers, Argentina beat a 10-man Venezuela 3-1 in Caracas, extending their unbeaten run to 21 matches.

Venezuela’s Adrian Martinez was red-carded for a harsh tackle against Messi, 32 minutes into the game. The Argentine team dominated the opponents throughout the match to secure a comfortable 3-1 victory. The first goal was scored by Lautaro Martinez at two minutes into stoppage time during the first half. The other Argentianina scorers include Joaquin Correa and Angel Correa who found the back of the net in the 71st and 74th minutes respectively. For Venezuela, Yeferson Soteldo scored the lone goal during stoppage time in the second half.

READ | Ansu Fati to don the iconic No.10 jersey for FC Barcelona after Lionel Messi's transfer

Meanwhile, Messi, who played for only 24 minutes during his debut with the Paris Saint Germain(PSG),  was on the field for Argentina throughout the game. His name was kept off the scoresheet by some brilliant saves by goal-keeper Wuilker Farinez.

READ | From Ronaldinho to Ansu Fati, a look at Barcelona players who donned iconic No. 10 jersey