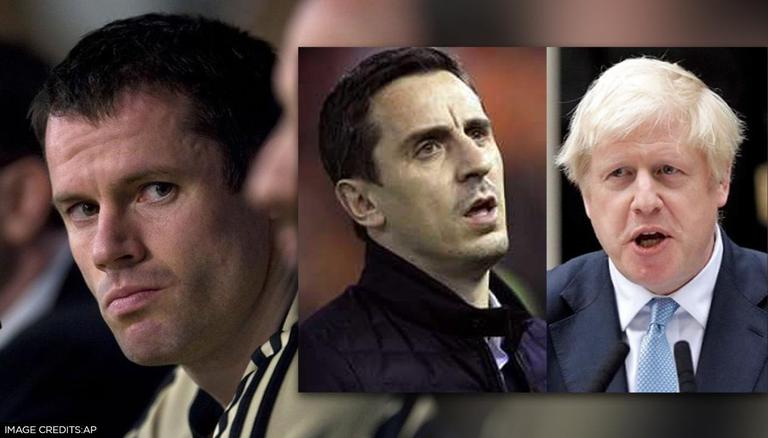 
Former Manchester United defender Gary Neville used an embarrassing record of former Liverpool defender Jamie Carragher to take a jibe at British PM Boris Johnson. After the intense rivalry of their playing days ended, Neville and Carragher joined Sky Sports as pundits, where they have often been seen poking fun at each other. Via a recent Twitter post, Neville claimed that the British PM has scored more own goals in his career than his broadcast colleague Carragher.

The former Manchester United player wrote such a post to highlight the 'incompetence' of Johnson in office. While Neville has been critical of the British PM for the way he has handled the pandemic, he was more critical of him when he seemed to take no action when football players were facing racism.

Gary Neville took an epic dig at Jamie Carragher to slam British PM Boris Johnson for his 'incompetency' in office. The former Manchester United player has been extremely critical of Johnson's stance when it came to English players taking the knee during the Euro 2020 tournament. The British PM initially refused to condemn fans who booed players taking the knee. Several suggested that Johnson took no action as several had suggested at the time that the move of taking the knee was politically motivated.

I know Twitter is a divisive place and put party politics aside but can we all agree this is an incompetent Prime Minister ?

In order to slam Johnson, Neville began a poll on Twitter to ask fans who believed the British PM was 'incompetent.' As per the results of the poll so far, 141,828 votes have been registered, with 89.6 % of fans admitting that Johnson has been incompetent. When a fan asked him if he and Carragher could be better alternatives, the former Manchester United player took no time in taking a hilarious swipe at the former Liverpool defender to explain his viewpoint. In response to the fan's question, he replied:

Boris has scored more own goals than even @Carra23 in a far shorter career! https://t.co/bcjgXYGtVm

Liverpool's Jamie Carragher has an embarrassing own goal record

During his Liverpool career, Jamie Carragher has found the back of the net at the wrong end more often than the right end. This is because he has scored three goals in comparison to seven embarrassing own goals. Moreover, Carragher also holds the record of scoring the most own goals in a game, when he scored two against Manchester United in a defeat in 1999.