The Bundesliga club's head coach Marco Rose thinks the prolific Haaland can be convinced to stay put if BVB's 2021-22 season is a successful one. 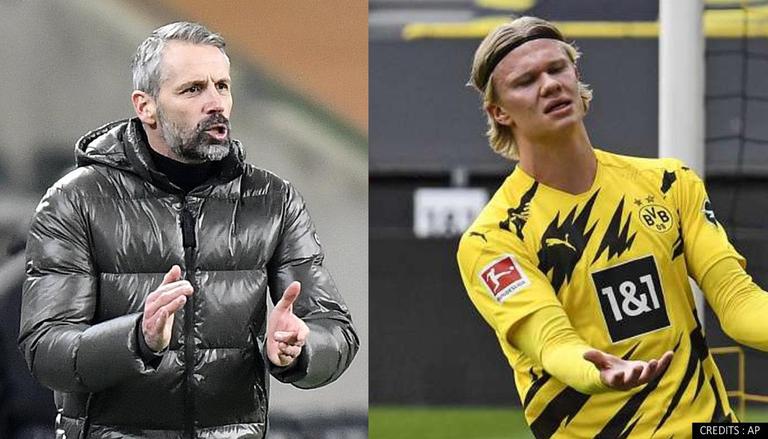 
Borussia Dortmund's head coach Marco Rose does not think that Erling Haaland will leave the club after multiple reports have stated that the Norwegian striker is looking to exit after this season is over. Haaland has been linked to many clubs through the transfer window but things seemed to have landed on the assumption that he will stay at BVB for this season and a reported €75 million release clause will become active in the summer of 2022. Most clubs are seemingly awaiting for the buy-out clause to come into play to start making their offers.

Rose on the other hand thinks that Haaland could end up staying past the 2021-22 season and see out his contract possibly.

"He still has a long-term contract with us. Just because the public is constantly talking about him leaving BVB next summer, that doesn't necessarily have to be the case," the Dortmund head coach said during an interview with Sport Bild. "In the end, Erling has to decide for himself where he sees his future. In any case, we are happy that he is currently playing for us - and, who knows, possibly it'll be even more than just one season if we write an extraordinary story here" he added.

So far, Haaland has managed to bag five goals in his first three appearances in all competitions this term. However, he did draw a blank in their 3-1 loss to Bayern Munich in the German Super Cup on Tuesday night.

BVB fans will look to their next game in the Bundesliga now against Freiburg on August 21 where they will be hoping Haaland can get back to his scoring ways.

Erling Haaland is a player that the entire world wants, claims Salihamidzic

In an interaction with Sport1, Bayern Munich's sporting director Hasan Salihamidzic has confirmed Bayern Munich’s interest in a transfer for Erling Haaland. Salihamidzic said that Haaland is potentially a player the entire world wants to have and that Bayern Munich is also interested. He confirmed that the Bundesliga champions are eyeing the situation and would be “complete amateurs” if they didn’t.

Erling Haaland could sign for Liverpool in 2022, says Rummenigge

"Yes. They (Haaland and Mbappe) could get there. We’ll have to wait and see where he goes after this season. Real and Barca have financial problems so I could imagine him moving to England. His father used to play there too. I could well imagine Liverpool for Haaland."

As per reports from The Sun, Haaland chose to snub Man United for a move to the Bundesliga as there was uncertainty over whether Solskjaer would still remain in charge. Erling Haaland has a close relationship with fellow countryman Ole Gunnar Solskjaer and was unwilling to risk a move to Old Trafford if the Norwegian was about to be sacked. Both the striker and his father, former Manchester City star Alf-Inge, were not inclined to work under a manager with who they had no relationship if Solskjaer was sacked. The Norwegian boss gave Haaland his debut as a teenager at Molde when he was the manager of the club. However, with Solskjaer now having signed a new three-year contract last week, Man United are confident that they are now favourites to sign Europe's most tracked striker.