Harry Kane transfer news: The Spurs striker has told the club that he wants to leave in the summer with the preference of staying in the Premier League. 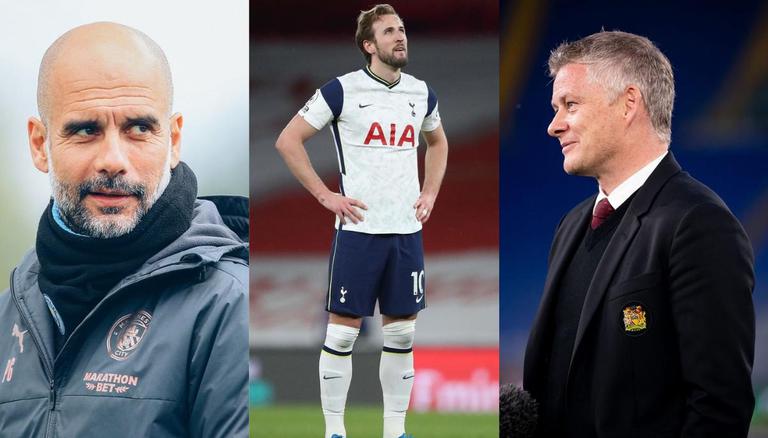 Harry Kane has reportedly told Tottenham Hotspur that he wants to leave the club in the summer as they prepare for another rebuild. Spurs are now making enquiries about replacement centre-forwards, in the first indication that the club are willing to consider the feelings of their 27-year-old talisman. However, this has sparked interest from the likes of Man City, Man United and Chelsea, with the three clubs keen on signing the England captain.

Following Tottenham's League Cup final defeat against Man City last month, Kane expressed his frustration at a continued inability to achieve his ambition of winning major trophies at Spurs in comments that felt like the first step of an exit strategy. Now, with Tottenham's failure to finish in the top four and secure UEFA Champions League football, Kane has reportedly told the management of his decision to leave in the summer. Reports from ESPN have claimed that Kane held a face-to-face meeting with Spurs chairman Daniel Levy and informed him about his decision to move on.

Harry Kane made it clear to Daniel Levy that he wants to leave Tottenham for another Premier League club, sources told @JamesOlley. pic.twitter.com/svwAlPyJHI

Harry Kane price: How much is the England captain worth in the transfer market?

While Spurs are still trying to keep a hold of Kane, some reports claim that they are willing to consider his feelings and allow him to leave. On the other side, though, Kane's deal with the North London club expires in 2024 which means he doesn’t have as much leverage as he would like. The common belief in the game is that it would take £150 million to prise Kane from the Tottenham Hotspur Stadium, although Spurs sources are insistent it would be more.

The situation could also be conditioned by the fact Levy may feel it is worth cashing in on the striker, especially with club resources stretched at a knife-edge period, as they seek another new manager. There is no scarcity in the number of suitors for Kane and the 27-year-old, who has 165 Premier League goals to his name, is widely recognised as one of the finest strikers in world football. Reports also suggest that Kane's preference is to remain in the Premier League and he wants to have his future resolved before turning out for England at this summer's European Championships in June.

Harry Kane has told Tottenham he wants to leave, with Man Utd, Man City and Chelsea all interested in him, according to Sky Sports News 👀 pic.twitter.com/iozYjvfWYt

With Sergio Aguero set to leave Man City at the end of the season, City are reportedly considering a move for Harry Kane. Pep Guardiola's Man City are in the market for Dortmund's Erling Haaland as well but Kane has the experience of Premier League football behind him. He is also likely to win trophies at City under Guardiola's management.

Man United have long been linked with a move for Kane. However, Edinson Cavani recently signed an extension with the club. With Kane reportedly available in the transfer market this summer, it remains to be seen whether United will launch a bid for the star striker.

Thomas Tuchel's Chelsea are also in the hunt for a striker as Timo Werner's struggles continue at Stamford Bridge. Tammy Abraham is also set to leave the Blues in the summer and Chelsea might look towards Kane as an alternative, who has already proven himself in the English top division.