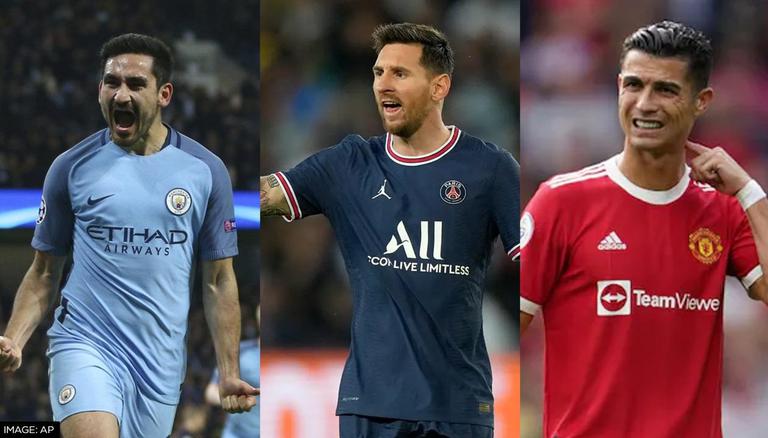 
Manchester City star Ilkay Gundogan has picked his favourite player between legendary footballers Lionel Messi and Cristiano Ronaldo. Gundogan, who conducted a Q&A session on Twitter, came across a question asking him to pick his favourite footballer between Messi and Ronaldo. Gundogan minced no words as he quickly picked Messi as his all-time favourite. Before answering the fan, the German player jokingly added how no Q&A session is complete with this question.

"Is it possible to go through a Twitter Q&A without this question? I still go for Messi..." Gundogan wrote on Twitter. However, when the 31-year-old was asked to name the three best players in the world based on their current forms, Gundogan left out both Messi and Ronaldo from his list. Gundogan picked Bayern Munich star Robert Lewandowski, Liverpool striker Mohamed Salah and Real Madrid's Karim Benzema as his top three in the world.

Is it possible to go through a Twitter Q&A without this question?😅I still go for Messi ... 🤷🏻‍♂️ https://t.co/2YvvyHljgp

Gundogan talks about his stay at Man City

When asked if he would like to return to Bundesliga someday, the German midfielder said he is currently "very happy" at Manchester City but did not rule out a possible return to his home country's league. Gundogan said Bundesliga is still a great league which he follows a lot. Talking about his pre-match routine, Gundogan said he sticks to the usual stuff like getting enough sleep, waking up in time, eating the same food, and stepping onto the field with his right foot first.

I'm very happy at ManCity right now, ... but never say never. The Bundesliga is still a great league that I'm following a lot. It will always be interesting for a German national player... https://t.co/TDbszl5nDn

Generally I try to stick with stuff. Always getting enough sleep, waking up similar hours, eating the same food, stepping on the pitch with the right foot first… https://t.co/AwSixRh1r5

Gundogan dubbed N'Golo Kante as the "strongest" midfield opponent he has ever faced on the pitch. Gundogan said Kante works very hard and puts a lot of effort into his game. The 29-year-old French footballer plays for Chelsea in the Premier League.

READ | MATCHDAY: PSG without Messi, Klopp back in Liverpool dugout

When asked to pick between Kevin De Bruyne and Mesut Ozil, Gundogan praised both of them saying while KDB has good "long balls, crossing and goal-scoring ability" and Ozil was better at "Vision, technique, passing". However, Gundogan added that both players are two of the best playmakers in the Premier League.

Gundogan himself has been in great touch as he has already scored five times for Manchester City across all competitions this season despite being a midfielder. He also has four assists to his name. Morever, he has played 22 games in total.