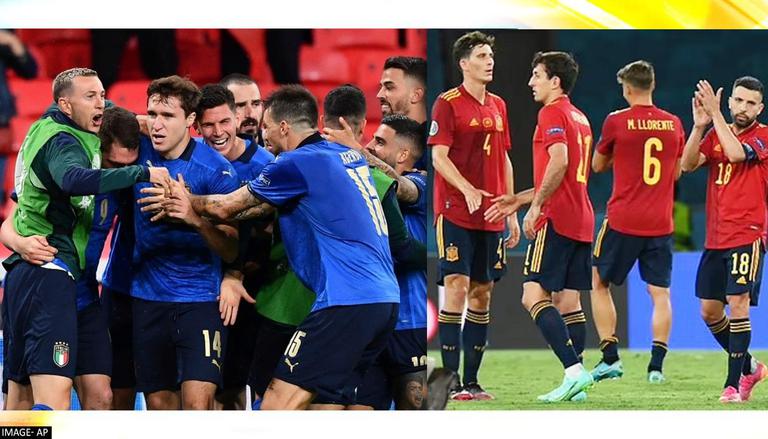 
Italy takes on Spain in the UEFA Nations League semi-final 1 in Milan on Thursday, October 7 at 12:30 am IST. Roberto Mancini's Italy are currently on an unbeaten streak of 37 games and will look to continue their great run forward. The team won the EURO 2020 and stand favourites to lift the Nations League trophy.

Spain meanwhile, comes into this fixture having won their last two games, first beating Georgia 4-0 and then Kosovo 2-0. Luis Enrique will hope that his side can come out victorious in this encounter and avenge their defeat from the EURO 2020 semi-finals. Here is our ITA vs SPN Dream11 Prediction and ITA vs SPN Dream11 team.

Italy vs Spain Head to Head

The two sides last met at the Euro 2020 semifinal clash, the two teams played out both regular time and extra-time with the scoreline ending 1-1. In the penalties, Italy got the better of Spain with a 4-2.

The Azzurri will be without the service of Ciro Immobile who had to withdraw from the squad following an injury. The player meanwhile has been replaced by Moise Kean who is likely to start up-front for the EURO 2020 Champions. Italy are also without Leonardo Spinazzola, Rafael Toloi and Matteo Pessina. For for La Roja they will be without Pedri, Dani Olmo, Alvaro Morata and Thiago Alcantara

Italy will head into this fixture as favourites to win. The team has been on a great winning run and will also have the advantage of playing at home. Spain will look to avenge their defeat from the EURO 2020 semi-finals but haven't been on top of their form. We expect a very closely fought encounter as very little to separate the two teams but it will be Italy who will have the upper hand.

WE RECOMMEND
Spain loses World Cup Qualifier for the first time in 66 matches, 2-1 against Sweden
Euro 2020: Luis Enrique compares Pedri to Andres Iniesta after Euro 2020 loss to Italy
Italy to get ‘Dolce Vita’ luxury train complete with retro fittings and opulent services
Listen to the latest songs, only on JioSaavn.com