Italy Vs Spain: 17-year-old Gavi Debuts For Spain, Fans Say 'Barcelona Has Got A Gem'

17-year-old Gavi made his international debut for Spain during the UEFA Nations League match against Italy on October 7, at the San Siro Stadium in Italy. 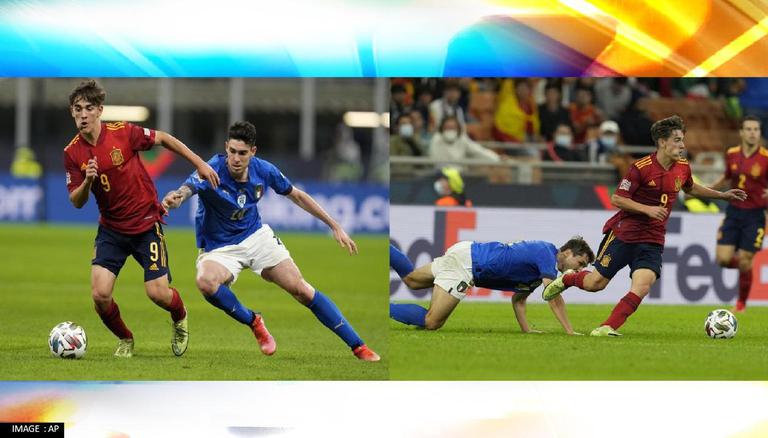 
During Spain vs Italy, the UEFA Nations League match on October 7 at the San Siro Stadium in Italy, Barcelona wonder kid Gavi Paez, made his international debut for Spain. In the process of doing so, he became the youngest player ever to play for the senior Spanish International side during the clash against Italy. He displayed incredible resilience throughout the match after being called up by the Spanish manager Luis Enrique, as Spain won over Italy 1-2. Ferran Torres scored both the goals for Spain at the 17th and 45+2’, while Lorenzo Pellegrini scored the lone goal for Italy in the 83rd minute of the game.

🇪🇸 Your thoughts on Gavi's display at the San Siro?#NationsLeague pic.twitter.com/6xTdhz9lz6

Gavi was added to the squad into the Spanish midfield alongside Barca team-mate Sergio Busquets and Atletico Madrid’s Koke against the current European champions. He made history as the match began by making his debut at 17 years and 62 days and broke the record previously held by Angel Zubieta in 1936. He has been associated with Barcelona, since the age of 11 and has appeared in seven matches for the team in the 2021-22 season.

💥Gavi has become the youngest player to ever play for @SeFutbol

👏 Very proud of you!
😱 What a performance!

Meanwhile, on witnessing Gavi create history with Spain, football fans took the social media by storm and hailed the Barca wonder kid. A user praised Barcelona for bringing out exciting young talents in form of Pedri, Gavi, Ansu Fati, Pigui, and Trincao, despite suffering tough times, following the exit of Legendary footballer Lionel Messi. Barcelona has won three matches and lost as many in the seven La Liga matches they have played this season, while one has ended in a draw. In the UEFA Champions League 2021-22, they are yet to win a match, having lost both the matches they have played till now.

READ | FC Barcelona under Ronald Koeman: List of unwanted records made under his reign

Barcelona might be struggling at the moment, but the future looks really bright for them, the likes of Pedri, Gavi, Ansu, Pigui, & Trincao. I don't know if they'll need a Messi to harness the success from old days, but surely the Xavi, Iniesta, Bousquet reincarnation is loading.

Some of the users hailed Spain’s boss Luis Enrique for deciding to include Gavi and Busquets in the team. He was earlier criticized by the fans for his call, however, the team ended up showing their masterclass against the 2021 UEFA Euro winners. Another fan said that in Spanish the team looked incredibly comfortable under the coach. Meanwhile, there many other reactions praising the 17-year-old for displaying strong performance against the likes of star footballers like Marco Veratti and Jorginho.

Spain fans were pissed off at Enrique for starting Sergio Busquets and Gavi tonight just for them to drop a masterclass against the 2021 UEFA Euro winners.

This Spain side looked so comfortable today man🔥.... Gavi is one for the future 🤌🏻

The way he stood up to Veratti and Jorginho👏🏼

Unbelievable how they look much better under Lucho, i guess that's the effect of a good coach..

WE RECOMMEND
Nations League, Italy vs Spain live streaming: How to watch in India, US and UK?
UEFA Nations League finals: All details regarding teams, schedule, venue and format
Benzema is 'more than top level' Witsel ahead of Nations League Semi
Mancini keeps Italy's Euro 2020 winners for Nations League
Kean, Calabria replace Immobile, Tolói in Italy squad
Listen to the latest songs, only on JioSaavn.com