It's Not Quidditch, But JK Rowling's Loving This 'goal Of The Century' Video & So Will You

Harry Potter author JK Rowling came forward and showed that she is a passionate football fan by liking a post shared by an ex-footie, of 'Goals of the century'

JK Rowling has won the hearts of avid readers with her Harry Porter novels which defined the childhoods of many millennials, and the adaptations of which were made on-screen as well starring Daniel Radcliffe, Emma Watson and Rupert Grint in lead roles.

While the authoress has made a tremendous impact worldwide with her writing skills, it might not be known to many that she is also a passionate football fan. As per reports, it has been learned that she is a huge fan of the Premier League club Tottenham Hotspur popularly known as 'Spurs'.

Meanwhile, Rowling has also liked a post on social media which was titled as the 'GOAL OF THE CENTURY'.

READ: Player sentenced to 3 months at home for flouting curfew

It so happened that former English footballer Sean Philip O'Hanlon had posted a video of two kids recreating a few iconic moments of some of the best goals that have been scored in the history of the game and it also includes Argentine legend Diego Maradona's epic 'Hand of God' moment which had come against England during the 1986 FIFA World Cup quarter-final. Not only did those kids recreate those moments but also carried out their signature celebrations after each goal.

Nonetheless, what really stood out here was that of the Harry Potter authoress making her presence felt and liking the post. It's not Quidditch but take a look. 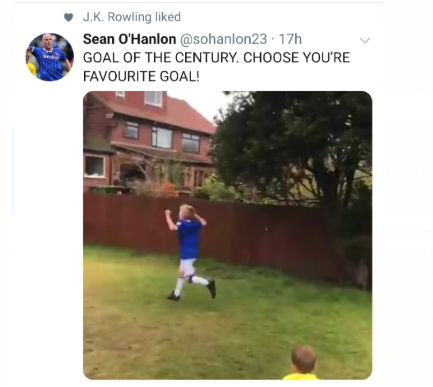 The contenders for the Goal of the Century according to the video include Portuguese megastar Cristiano Ronaldo's goal against Portsmouth in 2008, Brazilian legend Ronaldo's 1998 goal against Lazio and Robin Van Persie's goal against Spain in 2014, etc.

READ: Cristiano Ronaldo says his intimate moments with Georgina are better than his best goals

PEOPLE HAVE PLEDGED SO FAR
LATEST NEWS
View all
4 hours ago
Arsenal's leaked 'blood-splattered' 2020-21 away kit leaves fans unimpressed
5 hours ago
Neymar is the best player only behind Lionel Messi, says former Barcelona president
9 mins ago
Atlético’s Costa could face 6-month sentence for tax fraud
4 hours ago
Georgina Rodriguez reveals the secret of keeping fit and training with Cristiano Ronaldo
4 hours ago
La Liga to return to action on June 11 with matches scheduled for every day till July 19