'Juventus Were Wrong To Assume They Were Better Than Verona': Allegri After 2-1 Loss

Dissecting their loss against Verona, Juventus boss Massimiliano Allegri admitted the club is in a 'bad situation' and called his team a 'mid-table' team. 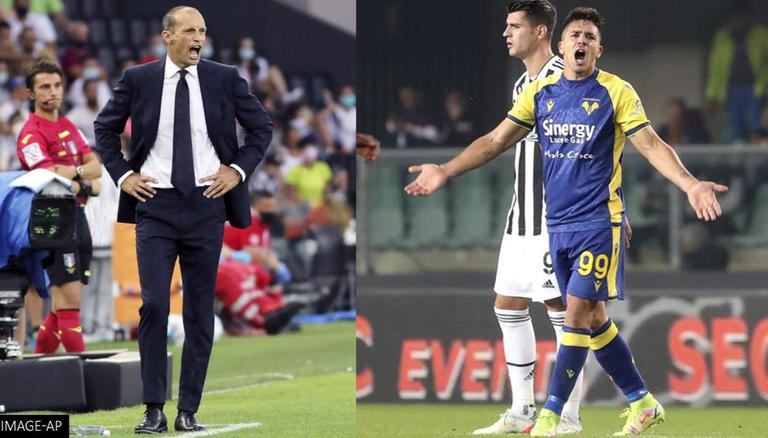 
Juventus' struggles in Serie A continued after they lost 2-1 to Verona on Saturday at the Stadio Marc'Antonia Bentegodi. A brace from Giovanni Simeone in the first 14 minutes sealed the Old Lady's fate despite Weston McKennie pulling one back in the 80th minute. After the match, Juve boss Massimiliano Allegri dissected their performance and admitted the club are in a 'bad situation' and called his team a 'mid-table' team.

“Words are meaningless right now. We’re in a bad situation, we have to accept the reality that right now we are a mid-table team. We can get out of this situation with a little more determination and quality,” Allegri told DAZN, as quoted by Goal.com, after the final whistle.

"We will drag ourselves out of this situation. There’s no point feeling sorry for ourselves, that won’t help. We just need to focus on what we need to do and then things will sort themselves out. It’s a good squad, but things don’t always go your way in football. We have to react with pride and determination. We had to play like a team that had one point, and we did, now we have to play like a team that has 15 points," Allegri told DAZN, as quoted by Goal.com.

'Verona knew how they had to play to beat Juventus'

Massimiliano Allegri lastly said that he knew Verona was going to make it a physical game but the players could not handle that level of play and they ended up losing. He said that Verona knew how they had to play in order to beat Juventus and they did just that.

Allegri told DAZN as quoted by Goal.com: "We realised Verona were going to make it physical and a battle for every ball, so if you don’t meet them at that level, you will lose. Wearing the Juventus jersey does not give us a guarantee we must beat the teams in mid-table. We have to earn every point and do it with the right attitude. Verona knew that was how they had to play in order to beat Juventus. Our mistake was assuming we were better than Verona, and right now we are not. We must be realistic. (sic)"