With several of Europe's top clubs struggling for finances, La Liga president hits out at PSG, who do not seem affected by financial constraints. 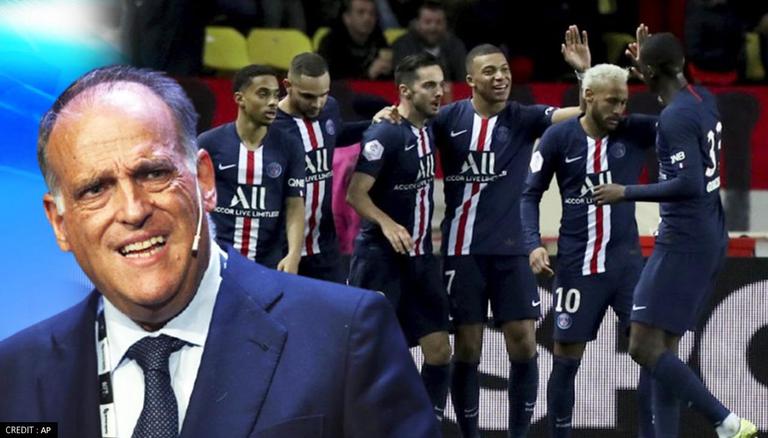 
With several of Europe's top clubs struggling for finances, La Liga president Javier Tebas hits out at Paris Saint-Germain (PSG), who do not seem affected by financial constraints. PSG astonished the world when they turned down offers of around 200 million Euros from Real Madrid for Kylian Mbappe. While the Ligue 1 giants have signed most players on a free transfer in this window, most of the players do have exorbitant salaries, thereby making it unbelievable that they could indeed keep hold of Mbappe.

La Liga president Javier Tebas attacked two birds with one stone as he took a dig at PSG and the European Super League simultaneously. Tebas tweeted (translated from Spanish), "The state clubs are as dangerous to football's ecosystem as the [European] Super League was. We criticised the Super League because it would destroy European football, and we have to be just as critical of PSG. COVID losses of over 300 million euros, TV revenues in France are down 40 per cent and over 500 million euros on salaries. It's unsustainable." His original tweet can be seen below.

PSG forward Kylian Mbappe was reportedly interested in joining Real Madrid throughout the 2021/22 transfer window. With the transfer window now having ended, it remains to be seen whether Mbappe will move to another club in January. Since the 2018 World Cup winner's contract expires at the end of the 2021/22 season, he could also sign a pre-agreement with other clubs in January.

PSG's biggest signing of the summer was Lionel Messi

Lionel Messi shockingly joined PSG on a free transfer this summer, ending a 21-year long stint at Barcelona. The Catalan giants were unable to offer him a new contract despite both parties reportedly having agreed on the terms. It is believed that since Barcelona has astonishing debts of more than a billion dollars, the Nou Camp outfit was unable to register the six-time Ballon d'Or winner because of not being able to comply with La Liga's financial fair play rules. The La Liga giants' debts were revealed by Joan Laporta in a press conference earlier in the season.