Argentina player Lionel Messi was presented to the PSG crowd in the jam-packed stadium which was quite excited to get a glimpse of the former Barcelona star. 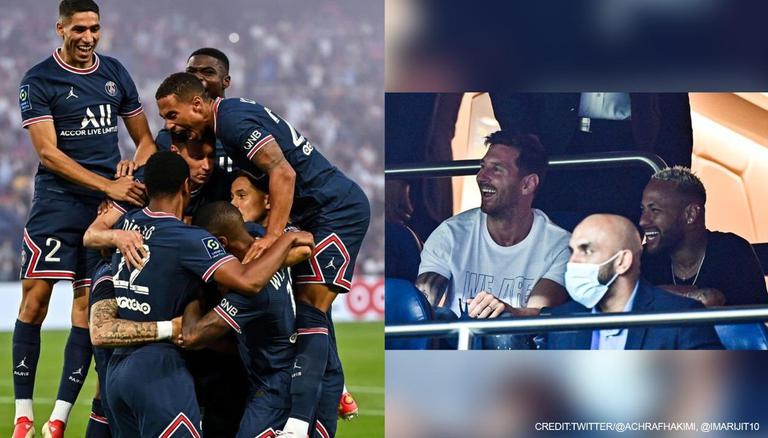 
Neymar Jr and Lionel Messi last played together at Barcelona in 2017 before the former was signed by Paris Saint Germain for a world record fee. Five years on and both Neymar and Messi will be sharing the dressing room once again after the Argentina maestro signed for PSG a couple of days back. Messi left Barcelona for the Ligue 1 outfit after it was reported that the La Liga giants were reportedly unable to fulfil the terms of the signed contract due to "financial and structural obstacles." During his time at Barcelona Messi scored 672 goals in 778 appearances for the club, a record tally for one club.

When Lionel Messi signed for PSH, the ex-Barcelona player was expected to take the field for the PSG Vs Strasbourg match of the new Ligue 1 season. To everyone's disappointment, Messi and Neymar Jr were not a part of the playing XI, however, before the match, the Argentina superstar along with  Gini Wijnaldum, Donnarumma, Achraf Hakimi and Sergio Ramos were presented in front of the fans. Despite not featuring in PSG's opening day match both Messi and Neymar were captured enjoying the PSG Vs Strasbourg match the picture of which went viral on social media.

Recap of PSG Vs Strasbourg

PSG made a great start to their new Ligue 1 season registering 4-2 win over Strasbourg. Mauro Icardi gave the team an early lead in the match before Kylian Mbappe doubled's team advantage with just 25 minutes on the clock. Julian Draxler made it 3-0 two minutes later following a cross from Mbappe. For Strasbourg, Kevin Gameiro and Ludovic Ajorque found the back of the net to make the match a nail-biting contest.

Strasbourg's Alexander Djiku was given the marching orders which let PSG off the hook nine minutes from time. Substitute Pablo Sarabia tapped home at the back post in the 86th minute to make sure of the unconvincing victory for Mauricio Pochettino's side. The win sent PSG top of the table with two wins from two matches, while last season's champions Lille were surprisingly thrashed 4-0 at home by Nice earlier on Saturday, August 14.