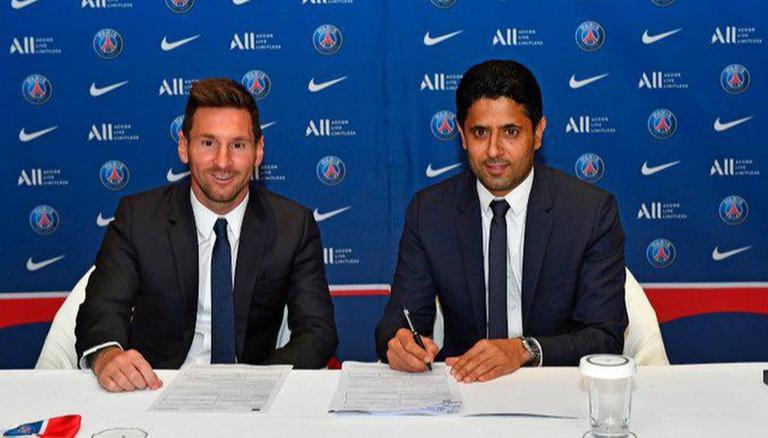 
Paris Saint-Germain (PSG) has announced a press conference for their newest and biggest signing Argentinian superstar Lionel Messi. PSG is expected to unveil the forward at the Parc des Princes followed by the Effiel Tower. Messi is going to be addressing his move to the Ligue 1 club and what his ambitions are with them. He is also going to have a meeting with the PSG President Nasser Al-Khelaifi.

Thousands of PSG fans had gathered outside the Parc des Princes ahead of the Messi PSG press conference and could be heard shouting "Messi... Messi... Messi" as they waited to get their first glimpse of the superstar at their home ground.

Hundreds of PSG fans have gathered outside the Parc des Princes ahead of Lionel Messi's first news conference pic.twitter.com/rgXlKMZQj2

PSG had confirmed the signing of Lionel Messi by uploading a series of social media posts. This is one of the biggest transfers in footballing history as Messi will reportedly be making €35 million per season, including bonuses. Messi has signed a two-year contract with PSG and has an option to extend until June 2024. He was later spotted in Paris at the airport and underwent his medical and made this transfer official by signing the deal. Messi will be taking kit number 30 at the Parisian club after it was reported that he declined the offer to take number 10 when Neymar offered it to him.

READ | Lionel Messi spotted in Paris; PSG confirm arrival of the legend in a cryptic tweet

Neymar had also confirmed the transfer when he uploaded a video of Messi and himself with the words "Back together" in front. They both played together in FC Barcelona and have shared a close friendship since often seen on holidays together. Neymar had made the shift from the Catalan club to PSG back in 2017.

Why Messi left Barcelona and how his exit faired out

While speaking at a press conference on Friday, Laporta explained that the club was not able to register Lionel Messi's contract because of LaLiga's financial fair play rules.

"What we are spending is a lot more than we expected and the current contracts mean that we have this salary mass of great magnitude. This is all tied to fair play. La Liga doesn't follow the criteria of cash, that is why we couldn't fit in the first contract that we agreed with Leo

Messi was reduced to tears in a heartbreaking and emotional press conference at Camp Nou as he bid farewell to his boyhood club FC Barcelona where he spent 21 years. As Leo stood by the podium, the crowd consisting of players and media persons, stood and applauded the legend for over a minute and a half, as Messi could not hold back his tears.