Lionel Messi bid farewell to Barcelona after spending 21 years of his career at the club and will now play for his new club Paris Saint Germain. 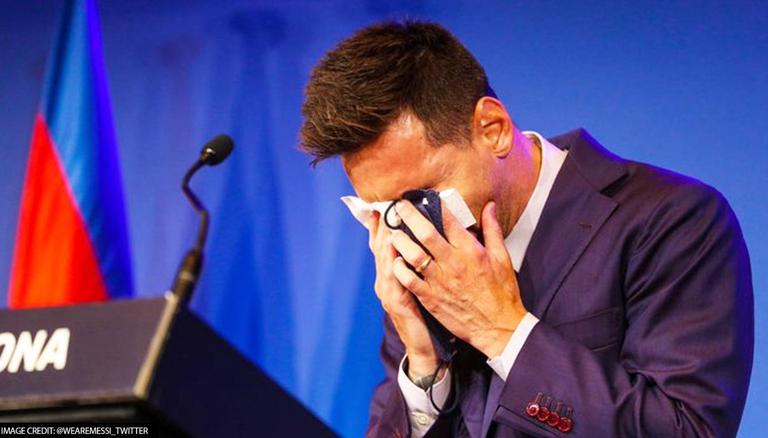 
Lionel Messi's exit from Barcelona was an emotional affair as the Argentina superstar breaking down while giving his farewell speech. As Messi stood by the podium, the crowd consisting of Barcelona players and media persons, stood and applauded their legend for over a minute and a half, with the player unable to hold back his tears. The 34-year-old bid farewell to Camp Nou after spending 21 years of his career and will now play for his new club Paris Saint Germain.

Messi's transfer to PSG came as a major shock for football fans around the world and during his farewell speech, when Messi couldn't hold back his tears, his wife Antonella gave him a tissue paper to wipe them off. Now a report has emerged that the tissue that Lionel Messi used to wipe off his tears during his emotional farewell speech at FC Barcelona is said to be on sale for an eye-watering $1 million.

When Messi cries, we all cry.
Big hug. ❤️ u Leo. pic.twitter.com/wAHhzWrkP3

According to complete sports, an unidentified person got the used tissue and posted an ad online saying that the tissue would be available for buy at an inflated price. The person auctioning the tissue on Meikeduo, quoted by Rojakdaily, hilariously claimed that the tissue contained Messi’s genetic material that would allow you to clone a football player like him.

When Will Messi Play For PSG?

After missing PSG's opening match against Strasbourg, questions have emerged as to when will Messi play for PSG. While there are no clear indications on Messi's PSG debut, but according to AS, Messi's debut could be pushed until September 12 specifically to make his first appearance in front of a full crowd at the Parc des Princes. But according to Sky Sports, he is expected to make his debut away against Reims on August 29, however, if he makes his debut on August 29 or the week after is something we will have to wait and see.

Lionel Messi at PSG will reportedly see him making €35 million per season, including bonuses from his two-year contract with PSG with an option to extend it to June 2024. At PSG, the Copa America winner will wear the No 30 jersey, the same number that he wore in his first two seasons with Barcelona before switching to No. 19 and then the prized No. 10 one