Michael Owen Twitter comments: Liverpool legend audaciously claims that assists under no circumstances should be seen at the same level as goalscoring. 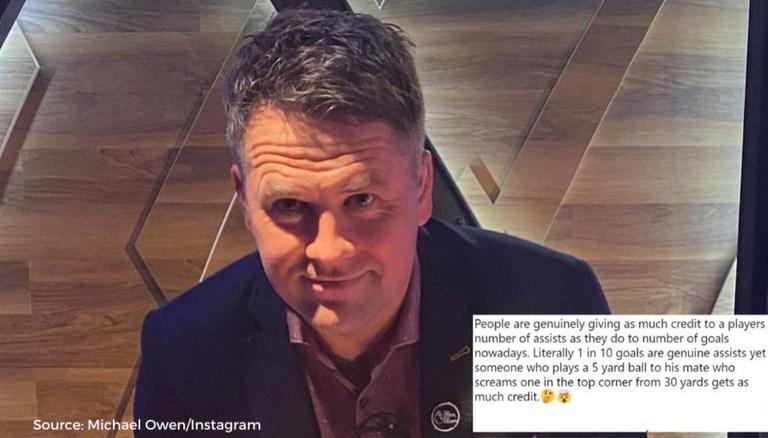 Michael Owen was present in the Premier League studios on Tuesday night to discuss the Manchester United vs Leicester City game at Old Trafford. Prior to the game, the Liverpool legend made some insane comments about assists not being as valuable as the goals scored. His comments can be seen below:

People are genuinely giving as much credit to a players number of assists as they do to number of goals nowadays. Literally 1 in 10 goals are genuine assists yet someone who plays a 5 yard ball to his mate who screams one in the top corner from 30 yards gets as much credit.🤔🤯

Michael Owen comments created a huge divide on Twitter as some fans favoured the goalscorers while some others admired the skill it took players to get assists.

You’re obsessed 😂 if Bruno only gets easy assists why has he created the most chances in the PL out of everyone?

And he’s still the top of that as well 😂👍 pic.twitter.com/fsBTwBj6ib

well that's not that impressive tbh considering that KDB has created almost as much while playing less 12 games.

Michael Owen is a typical centre forward who loves scoring and admires great goalscorers himself. However, his comments about assists were not taken well by former Arsenal midfielder Cesc Fabregas, who immediately hit back at his claims.

I don’t completely agree there Michael. Making & creating can be sometimes twice as hard than making a run or scoring a goal. Don’t underestimate the little time/space we have in midfield to take best decision for you guys + the imagination/creativity we should have to find u. https://t.co/aSC0koteVY

However, Owen seemed unimpressed with Fabregas' explanations of why assists should be viewed at the same level as goals as he continued his rant.

Agreed but my point is that in general it’s far harder to score goals than assist them yet we are starting to measure them as equal which is bollocks. https://t.co/4SSRQGnY6W

If anyone thought that was the end of Michael Owen Twitter rant they are here for a surprise. Owen, who was analysing the Man United vs Leicester game, was unimpressed with Amad Diallo's five-yard pass to Mason Greenwood, who came up with a brilliant finish to equalise the scores. The Liverpool legend wrote:

So, 3 goals in #MUNLEI game. Anyone make a case for any assist having greater difficulty than the finish? And to highlight my original point, Amad’s pass to Greenwood goes down as an assist🙈 Another x10 five yard passes like that beauty and he makes the top of every stat list🙄

As one can see in all of Michael Owen comments, the Liverpool legend completely disregards the ability assist providers and playmakers possess. Owen fails to acknowledge the fact that goalscorers too can score the simplest of goals that have been created as a result of a beautiful pass. For example, most of the forwards score goals that are tap ins or simple headers that are created by brilliant assists.

As a result of Leicester City's win against Manchester United on Tuesday night, Manchester City were crowned Premier League champions for the third time in four seasons. Pep Guardiola's men currently have an unassailable 10-point lead at the top of the Premier League table with three games remaining in the season. When the Cityzens were confirmed champions, Michael Owen took to his Twitter handle to post the most obvious post after he was tired of arguing.

I don’t think anybody can argue with @ManCity being crowned @premierleague Champions. A phenomenal team led by a genius of a manager. These are about to turn blue.... pic.twitter.com/uB5ESBoxg1